We’ve been working with our fabulous fishmonger Mark Lobb ever since we moved here which is getting on for 13 years now. In all that time, and seemingly for many years before, he’s talked about when he’ll be in his shop having traded from a stand in the Friday market since the 1970s. This meant before even starting to sell fish, he and his helpers would have to put up the stall in all weathers before lugging in the day’s fish from Brixham fish market and then deconstructing it all at the end of the day’s trading. Always cheery despite the early mornings of a fishmonger, even Mark was getting a little weary from all the prevarications and delays in planning and building works.

However now, and since August this year, Mark has been in his shop just at the entrance to the Market Square – hurrah! Now Dartmouth has 2 fishmongers, 2 bakers and a thriving butchers as well as a host of delis and coffee shops. An added bonus to Mark opening up his shop is the little kitchen at the side and the addition to Mark’s team of Julie Graham – a well-known local chef who is rustling up chowders, fish frittatas and fish pies to eat at the shop’s tables or take home.  Great for a cook to be able to use the choice of fish from the shop  and for the customers to have her on tap for advice on cooking fish at home. Also good for the Market Square to have somewhere else to eat in addition to Rob’s Café and Rayne’s Deli so the more people get to know about it, the more will come to this great little enclave of shops and eateries.

So after a well-timed dog walk (ie finishing up in time for a late lunch) through Sand Quay woods we headed with 2 damp dogs to Mark’s for some of Julie’s fish chowder, thinking that wouldn’t be a problem on a Tuesday in early December. But too late, all sold out – darn it! Seems the local market traders and shop keepers know when something good is around and they had beaten a path to the chowder pot before we did. Fortunately a salmon frittata was just coming out of the oven which was demolished in no time – yum! Will just have to get there earlier for chowder…. 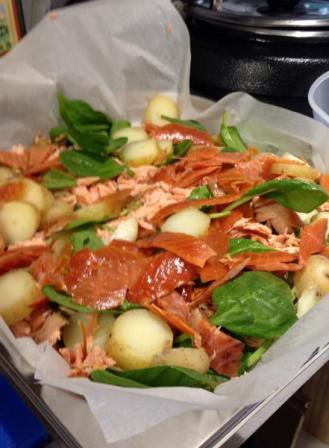 Salmon frittata heading into the oven – no pictures of afterwards as all scoffed! 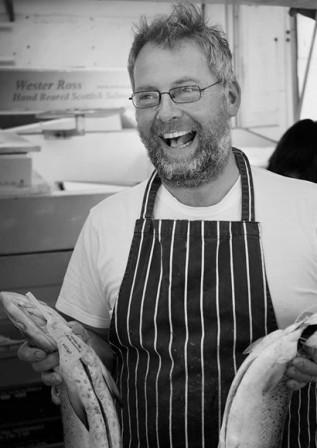