We caught up with old friends in Atlanta over the weekend.  Spending time with old friends we seldom see has been the highlight of this trip, topping any amount of great barbecue. Having said that, Rod and Linda knew we were exploring BBQ so wanted us to try a couple of Atlanta’s offerings; by the time we left Georgia on Monday morning we were pretty protein sated. On arrival in Asheville, back in North Carolina, we couldn’t face another plate of meat so sufficed ourselves with pizza and beer (see earlier blog post).

However, we then woke up this morning and realised that Asheville is not all about beer; it also has great barbecue and there appeared to be several unmissable places. So we embarked on a crusade to taste the best we could find and found our way to three different establishments.  Luckily for us all bbq joints offer combo plates which means we could share one plate between us, pass on the fries, taste several different things and not break out in a protein induced sweat.

Here’s the run down: 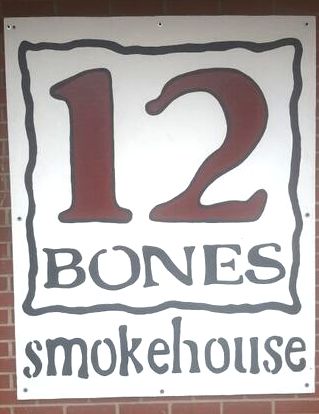 Whenever the Obamas come to Asheville, which is quite often apparently, they always stop by 12 Bones. and when they can’t make it, they send for take out. That’s a pretty good accolade for any restaurant, especially for what is otherwise a very unpretentious barbecue place by a run down undustrial estate … kudos to them.

12 bones obviously has more fans than just the president of the USA.  We arrived at 11:30 (having skipped breakfast) and by 12 the queue was out of the door. We ate pulled pork, chopped brisket and ribs with a blueberry/chipotle  glaze with a green salad, pickled okra and vinegar slaw. Everything here was really well done; we both loved the vibe at 12 Bones, we bought the book, definitely reccommended. 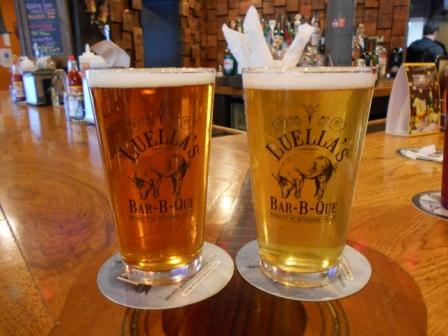 We wanted to go to Luella’s because we were told in Charleston it was very different as Asheville is a bit alternative – think Totnes. Apart from having one dish of barbecued tempeh on the menu it seemed otherwise fairly standard barbecue to me, but perhaps just daring to barbecue a non meat item is enough to get a nationwide reputation in barbecue world.

We ate andouille sausage (not the French version, more of a firm, lightly spiced pork sausage in this case); brisket and chicken wings along with some slaw and beans & rice. Everything looked good and nicely served.  The wings and sausage were great and the brisket very tender but a bit dry.  Of course it had a great selection of craft beers.  Luella’s is definitely worth a stop.

So far so good.  two really worthwhile barbecue stops under our belts.

I’m not a God-fearing man but if I were I’d praise the Lord right now that he didn’t make me so full after 12 Bones and Luella’s that I couldn’t face a visit to Moe’s. The barbecue at Moe’s is “lick the sauce off the paper that lined the basket it came in good”.  And that’s damn good! 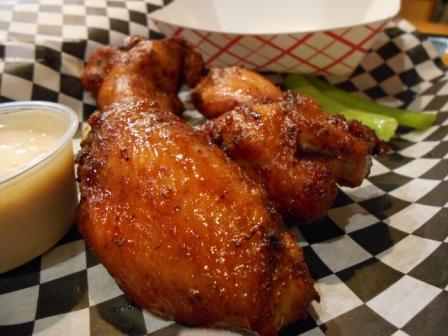 It’s always encouraging when, having asked the chef what we ought to eat, he launches into a litany of how good each of his dishes is.  Sometimes this is a bubble of hot air which bursts when you discover that the chef has a good deal more confidence than he does competence.  Thankfully, in Sam’s case, he spoke only the truth when he told us his chicken wings were some of the best we’d ever taste. We didn’t order the wings but Sam brought us some anyway after we’d showed an interest and told him what we were up to.  Then he gave us a back of house tour, told us in great detail his cooking methods and, after we’d ordered pork and smoked chicken, he also brought us some ribs and some of his incredibly light corn bread just because we ought not to leave without tasting these. 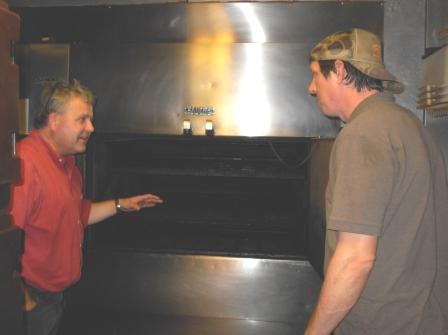 Everything we tasted hit the nail on the head.  Tender juicy meats that tasted of smoke but not too much smoke; sauced but not so much that it detracted from the taste of the meat. A great coleslaw, fresh and a contrast to the depth of flavour in the meats. Faultless barbecue cooked by someone who knows what they are doing and really wants to do it well everytime.

We left Moe’s having eaten more than we intended but super glad we got to try everything.  Moe’s is more than worth a visit, Moe’s is worth a flight across the Atlantic. Maybe someone should tell the President….