Despite the generally foul weather, when your last choice of profession would probably be fishing, there are still boats going out to sea to catch what’s around. And what’s around in these waters this end of winter/start of spring is the fabulous silver darling – the oily herring. Generally not eaten so much by us Brits but relished by our Scandinavian, German and Eastern European cousins, I do remember buying them with my Dad in the market in Liverpool – rolled and baked with onion, bay leaf and vinegar, it was a good way of preserving a glut of fish. Served warm or cold they were a weekend treat and they got me hooked early.

As we’ve said before, we’re so lucky to have our fishmongers here in Dartmouth and Brixham who have herrings on their slabs in season, glittering away. Full of omegas, vitamins, minerals, protein and fish oils, it’s a real shame we don’t eat them more than we do. Generally portion sized so it’s easy to shop for however many you want and pretty reasonable in price as they aren’t popular. If you have 30 minutes, do try and catch up with the Briefing Room where they try and explain our complex relationship with fish, why we eat what we do and send more than 80% of our catch abroad while importing 70% of the fish we do like -things like prawns, cod, tuna.

Herrings are scaly fish but the kind of scales that come off the fish really easily – they will just rub off with your thumb under the water from the cold tap. In fact, get your fishmonger to scale and fillet them for you and they just need a quick rinse. And yes they are boney but the bones are fine and soft and the flesh will generally come away from them really easily so don’t worry too much about the occasional one getting through. It’s not going to be the great stabbing bone from a bass or bream that will do you some real damage.

We love the connections between food and social history and the herring has a tale to tell. Always popular on fast days (so twice a week when we were a Catholic country) as they were cheap and nutritious, the huge shoals of the North Sea were caught, filleted, salted, barrelled and sent to Italy, France and Spain so they could eat them on their non-meat days and this carried on right into the 19th century. See – exporting our catch is nothing new!

Here’s a few ideas of what to do with them, do give them a try!

Make a marinade with 150ml white wine vinegar, 100g caster or granulated sugar, 1tsp black peppercorns, 1tsp fennel seeds, a few sprigs of fresh thyme and the juice of 1 blood orange – basically, just bring everything to the boil, dissolve the sugar and let it cool. While the marinade is cooling, mix 1 cup salt and 1 cup white sugar with1tbsp fresh thyme leaves, 1tbsp fennel seeds and 1tbsp coriander seeds (crush the seeds first). Put half this mixture into the base of a flat dish with the zest from the orange and put 6 herring fillets on top. Cover the fillets with the rest of the dry salt mixture and put all of this in the fridge for 4 hours. Rinse the fillets and pat them dry after the time in the fridge. Put them on a serving platter and spoon over some of the blood orange marinade. Serve with rye bread and cream cheese. 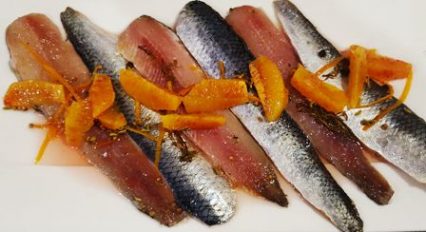 Huge thanks to our friend Mitch Tonks of the fabulous Seahorse in Dartmouth for letting us use his marinated herring recipe. He adds some shredded fennel or radished as well to the finished dish for an added crunch. Yum!

Slow cook 1 thinly sliced white onion with 1tsp dried thyme in a little olive oil until soft and season well with salt and pepper. Roll up 6 herring fillets with this onion mixture divided between them and a small bayleaf in the middle of each one. Pack them into an ovenproof dish or frying pan and sprinkle over 1tbsp coriander seeds. Add a mixture of 1 cup water and 1 cup white wine vinegar, cover and bake in an oven at 170C for 20 minutes. Cool, reduce the liquor and serve at room temperature with crispy fried potatoes and salad or just with bread and butter. 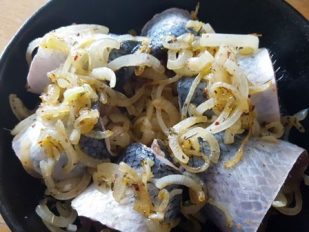 Put 8 herring fillets in a platter of plain seasoned flour and make sure they are well covered. Put them in some beaten egg and then in some fine oatmeal or dried white breadcrumbs, again so that all the fillets are covered. In a large frying pan, heat about 4tbsp sunflower oil and 30g butter until the butter is foaming. Gently cook the fillets for 2-3 minutes on each side until golden and crispy and then serve at once. Perfect with a squeeze of lemon for breakfast or with sautéed potatoes and a green salad for a main meal.

Fresh herrings at this time of year will often come with their roes inside  – instead of chucking them out, roll them in breadcrumbs as above and fry until crisp and golden. Serve with a good squeeze of lemons and some baby capers and freshly chopped parsley for a quick, crispy on the outside, creamy on the inside snack.

Herrings are traditionally fried in oatmeal as they used to be mainly caught in the north east of England where they grew oats and barley rather than wheat – so you used what you had.

When herring are caught, they are caught in volume due to their shoaling instinct. As an oily fish they deteriorate quickly so were traditionally preserved by salting or smoking and that’s what we know as kippers and bloaters. Kippers are what you might associate with uk preserved herrings – split, salted, cold smoked and served for breakfast. To do this you can grill them with some butter under a hot grill (the smell well linger in the house… ) or cover them with boiling water for ten minutes and drain well before serving.  A bloater is another smoked herring but not split – just cold smoked whole. Again cook them under a hot grill or in a hot oven until heated through. As a fish for breakfast lover, there’s not a much better way to start the day!

Suzie from Michael Sutton’s Cellar has come up trumps again and is suggesting an English Sparkling Wine to cut through the richness of the herrings and the acidity if you go down the marinated road. Thanks Suzie!

BTW, if you can’t hear the word bloater without humming “When the Boat Comes In”, do enjoy this!