They eat a lot of fish in Japan

So we all know that the Japanese like fish; apparently 10% of all the fish caught on the planet is eaten in Japan despite comprising less that 2% of the world population. I always knew they liked it but I’ve now seen it in action. In the 8 days of my visit I must have eaten fish every day and on some days at every meal. Fortunately I like fish too.

The obvious example and what we all tend to think of as Japanese food is sushi and sashimi using super fresh fish such as mackerel, tuna, crab, scallops, cod; in fact all manner of seafood and seafish.  However, that’s not the whole story by a long way and I also had it grilled, fried, poached , in soups and stews, hot, cold, you name it. 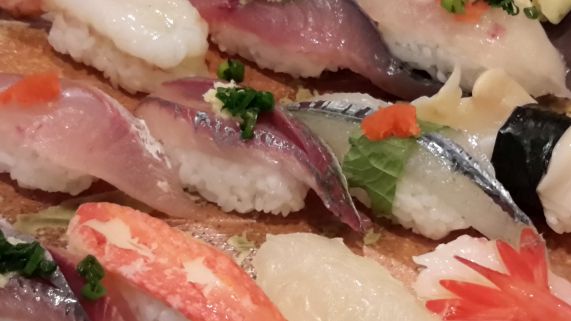 Fresh fish is available in abundance but there’s also a great array of ways of preserving the excess fish. Wind dried fish, squid and octopus (some just for a few hours; others until completely dessicated),  fillets cooked in sugar and soy, preserved it in vinegar or rice bran and also made into fishy soy sauce similar to the Thai nam pla. 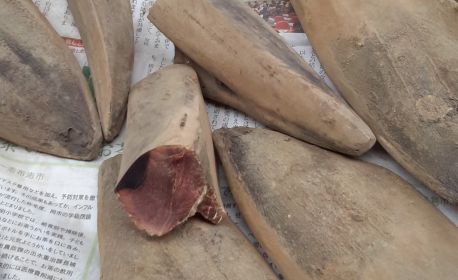 Not only do they eat a lot of fish, they eat a lot of every fish they catch. I spent a fabulous early morning on the Noto peninsula coast, watching the crew of a fishing boat bring in their catch. That day it was mainly cod and sardines with a few flat fish and octopus thrown in for good measure. 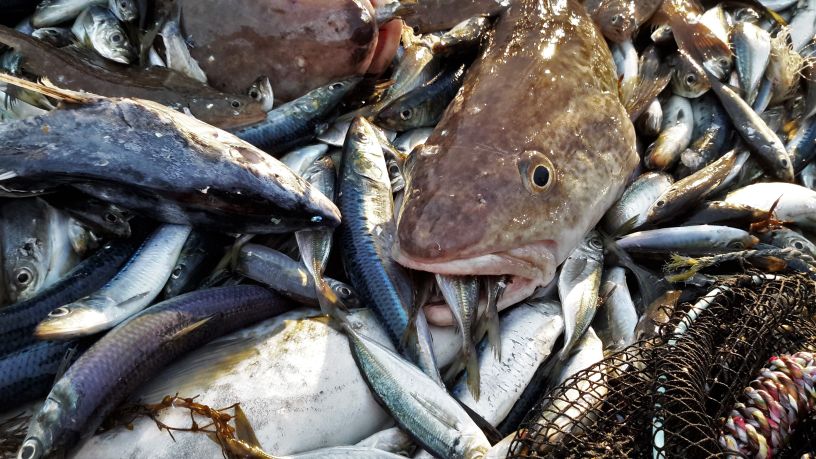 Catch of the Day

This crew fished from 2 permanent fixed nets, going out at 3am to see what had been caught and getting back to port 2 hours later with as much as they could handle for that day. These nets are huge – about 500m long with a 1km gate to guide the fish into the holding nets, the smallest of which is 40m long. 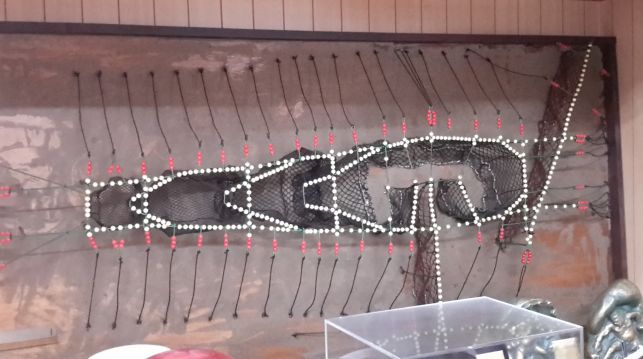 Little fish can escape through the net holes and there is plenty of room for the catch to swim around. Apparently the largest creature they had seen in the net was a shark with a dorsal fin taller than one of the crew so having considered their options, the shark won and they let it swim off.

Once back in port the fish is divvied up into those that head off to the local fish market; some that are selected for Tokyo restaurant customers and others that are sent to the boat’s own processing plant where a sushi chef fillets the catch for selling at local supermarkets and preserving in a variety of ways to add value to the daily haul.

What struck me in the processing kitchen was how little waste there was from each fish. From a 6-7kg cod there was maybe around 50g of waste. So after the fillets had been taken off, the heads were packaged up for people to make soup and suck off the flesh; then all the offal was prepared for selling and cooking – heart, stomach, roe, gills, bones, eyes, even sperm sacks (the highly prized chrysanthemum, as it looks like a flower head). Truly nose to tail eating on a fishy scale.

After all the work was done, the crew cooked breakfast (that day, cod sashimi and fish soup with rice) and sat down together to eat, a good way to share any news and air any problems, over a meal of the freshest fish. 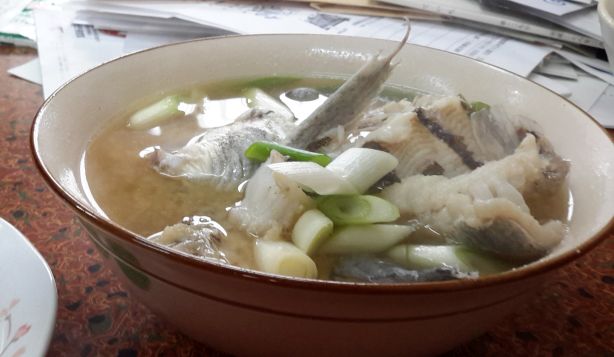 This was fishing on a small scale and at the very farthest end of the scale compared to the volume of fish we saw being sold in Tokyo’s famous Tsukiji fish market, the world’s largest. An early start of 3am meant we just managed to get in to see the tuna auction – a remarkable sight of the daily thousand tuna of 100kg each, being sold at 3000-5000 yen per kilo. The tuna auction alone turns over $30 million weekly so that gives you an idea of the volume when Brixham Fish Market’s turnover is around £32 million annually. 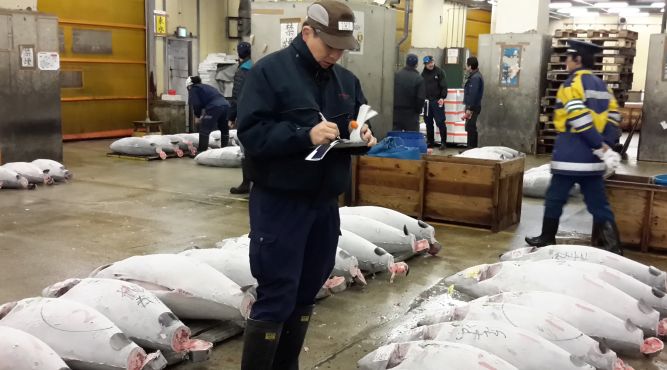 Tuna at Market in Tokyo

After the auction we visited the wholesale/retail market, much more like Billingsgate but again on a vast scale with a warren of lanes holding hundreds of stands, maybe over a thousand, involved in the serious business of selling to the trade and public. 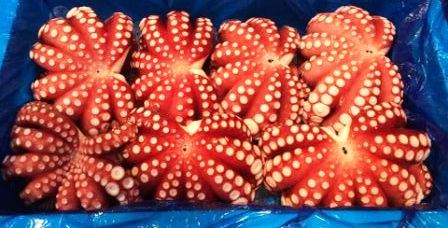 Octopus at the market

Literally everything you can catch was being sold from volumes of squid, octopus and cuttlefish, crab, scallops, whelks and other shellfish, to all manner of white and oily fish and a vast selection of sea vegetables and seafood – sea cucumber anyone? (actually delicious served raw with a shaving of grapefruity yuzo zest). The tuna we’d seen at auction was now being filleted with care and enormous 4-5 foot knives. 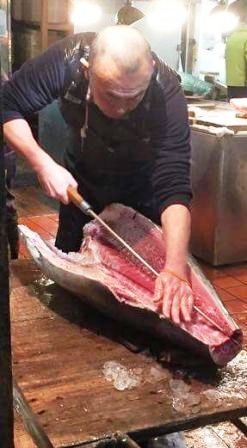 The word is that Japan’s annual consumption of fish is falling from a peak of over 40kg to a current 27kg per person compared to a global average of around 19kg. Despite this, I witnessed a respect and relish for all things fishy from people in every age bracket.

My last meal in Japan at a slightly scruffy East End Tokyo pub bore witness to this – 2 big U-shaped tables squashed in the room, the menu on the wall and 2 waiters barking orders at the kitchen and customers alike, with an endless queue of people waiting patiently to wolf down every kind of fish cooked every kind of way. Delicious. 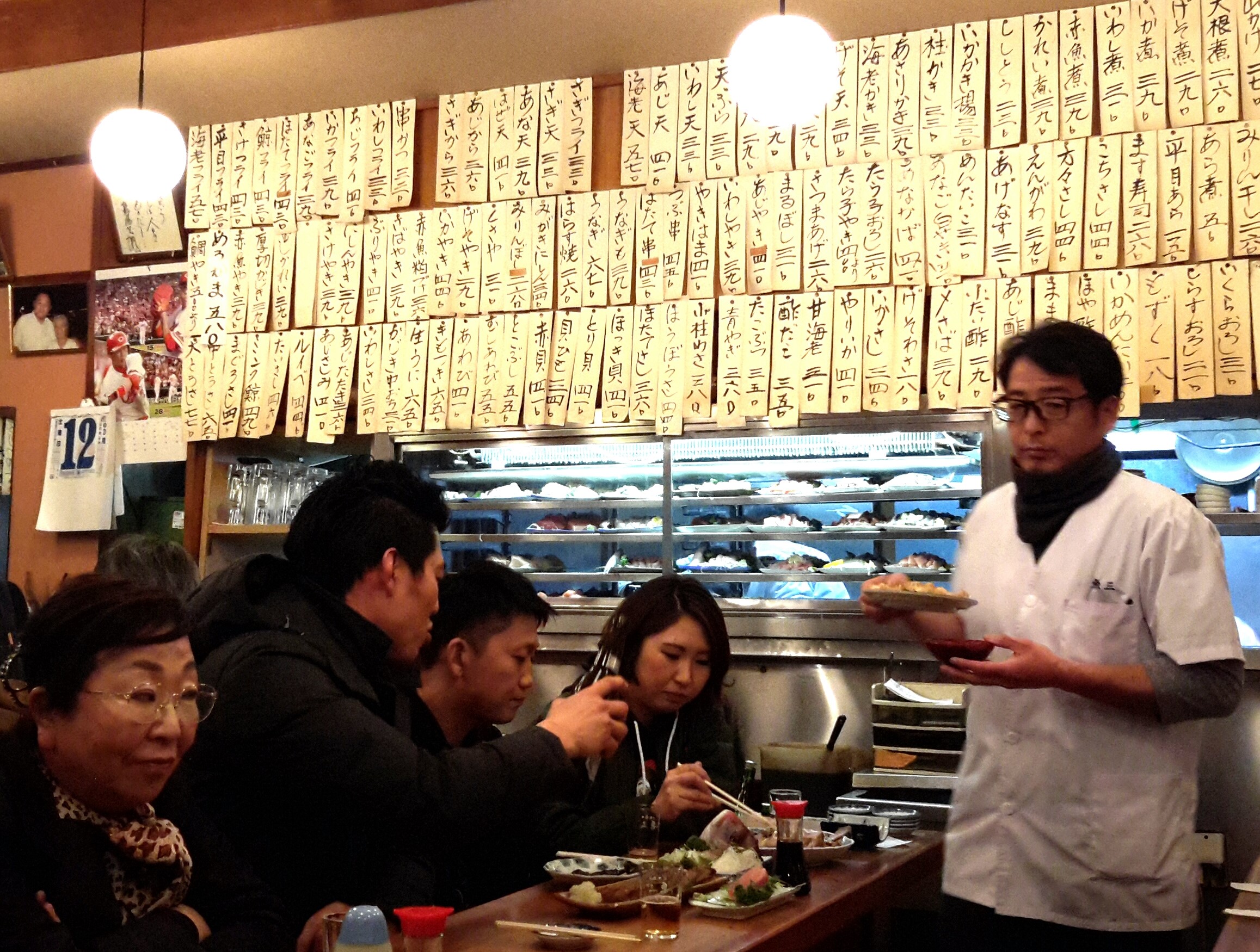