All seasons bring their excitement in the food world and winter is a great source of seasonal goodies from the abundant fish and seafood coming into Brixham Fish Market which you can buy at the fishmongers in Dartmouth to all the fab root vegetables and brassicas in the greengrocers and the game coming from the local shoots. We are lucky enough to have friends who drop in a few birds if they’ve been out for a day of shooting or beating and we love putting them to good use – the birds, not the friends. Many thanks to Howard and Ken – our source of randomly regular pheasant drop-ins throughout the shooting season. You can also buy them from the butchers and Mark Lobb will often have game for sale in the Market Square; if you don’t get them free from friends, they don’t cost a lot to buy. 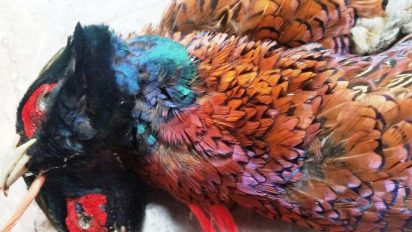 Beautiful plumage on the cock pheasants

Pheasant are the most numerous arrivals with the occasional partridge or pigeon. The breast is the meatiest bit so if we’re short for time, we just slit the skin over the breast, pull it back and then take the breast meat off with a sharp knife. Don’t get alarmed if there is bruising on the meat – it’s just where the bird has been clipped by some shot. Make sure your knife is sharp so you get as much meat off the carcass as you can. 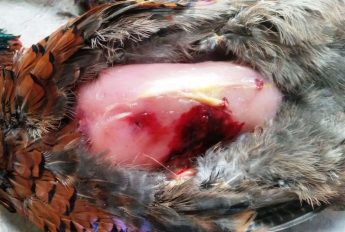 Splitting open the pheasant to expose the breast meat.

If we have a bit more time, we’ll take the meat off the whole bird as there is a bit more on the thighs. The legs get a bit sinewy so they just go straight into the stock pot as if we’re making chicken stock. Pick over the flesh in case of any lurking lead shot which you don’t want to bite into. We’re not great fans of well hung game so we use it as soon as it arrives, not leaving them hanging around which will increase the gaminess. If you can’t deal with them straightaway, leave them hanging in a cool place and don’t forget them especially if the weather becomes warm as you’ll attract bluebottles.

As far as cooking the pheasant goes, you can pretty much treat them like chicken – roast or pan-fry the breasts, chop it up and cook them in a sauce (curry works well), or braise with mushrooms and red wine for a casserole which could then have a pastry topping put on. If you can’t get any pheasant or don’t like it, just use chicken breast and thigh.

As Christmas is coming up, we’ve used the latest delivery to plan ahead and make a terrine which can be frozen and brought out for the festivities. We’ve cut it into sections, wrapped it tightly in clingfilm and frozen it like that so we don’t have to get out the whole terrine. Served with some great bread and onion marmalade or cranberry sauce, it will make a lovely lunch, or serve it on biscuits with drinks, in sandwiches if you’re out for a walk or you could even use it as stuffing in a chicken or the turkey itself.

Here’s how we made our pheasant terrine –

We hope that’s given you an idea for some food for the holidays and getting ahead in the planning stakes; there’s always more than enough to do so it you can get something else sorted in advance, then that’s got to be a good thing.