If you have an excess of tomatoes and aren’t likely to use them up, dry them out in the very fallen heat of your wood fired oven and then you’ll have your own semi-dried tomatoes. We bought a box from of Isle Of Wight tomatoes which are fantastic and there were so many we had to preserve some; even we couldn’t eat the many!

After a full-on pizza making session in the Bushman oven finishing at 10pm, the oven was fully heated, really not a good time to put the tomatoes in so in went some slow-cooked dishes – chilli, tagine, beans – last thing at night and came out in the morning. After breakfast and another couple of hours when the oven wasn’t doing much, David arrived with this tray of halved cherry tomatoes sprinkled with a little sea salt on each one and with a few halved garlic cloves for infusion. Into the oven they went, door shut fully and the heat was about 60C on the walls and floor so not really very much heat at all. The tomatoes were left in for 6 hours and they came out slightly shrivelled but still juicy and intensely flavoured. Delicious… 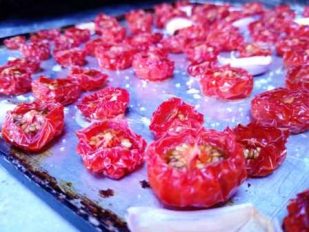 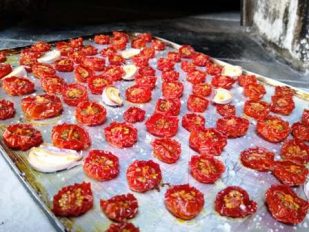 They then were packed into a sterilised jar and covered with just warmed olive oil. The sterilised lid went on and the tomatoes cooled right down before heading to the fridge and being used up in a whole variety of things – on pasta, in sauces, on crostini, in a fresh & dried tomato salad with mozzarella and pesto dressing as below, on foccaccias, on pizzas, in sandwiches…. 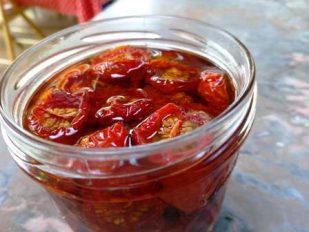 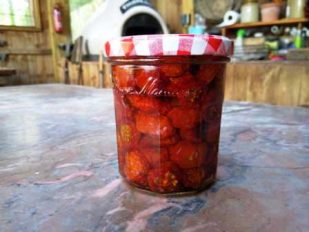 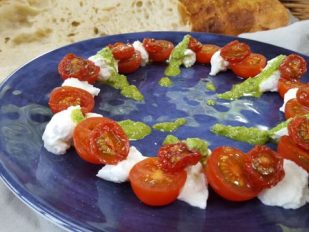 Hope that gives you some ideas of what to do with some excess tomatoes and the most negligible amount of heat in your oven.