Some of our favourite woods to use in the woodfired oven

Traditionally people would have used whatever wood grew locally to them to burn in their woodfired ovens – head outside, pick up some fallen wood, chop it up and start their cooking. So that would mean olive wood in the olive groves of the Mediterranean, apple in the orchards of Kent, vine prunings in the vineyards of France, even almond shells in the south of Spain and pine from the Mediterranean pine forests; you get the picture.

When we met up with the legendary barbeque giant Rodney Scott on our trip round the southern states of America researching barbeque (yes we know – someone’s got to do it!), he said they used macadamia, hickory and cherry for their long slow smoking of whole hogs.  This sounded pretty exotic to us and we asked why he selected those woods in particular. Rodney’s answer to that was, well, it was just what grew out the back….

Nowadays it’s pretty easy to get pretty much anything on the internet and order up wood either for flavouring and smoking or for heating up the oven and maintaining the fire. But which ones should we pick?

Here’s a rundown of some of the most available woods for using in your woodfired oven here in the UK. Do let us know what you use and if you live somewhere else, let us know what wood you would use. 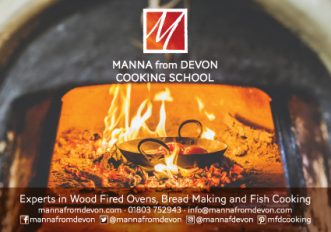 Alder is an orangey hardwood; not very dense, it grows quickly so is straight grained and consequently easy to split. It burns well but quickly and doesn’t leave much in the way of embers. Good for using in smoking especially for eg salmon. It can spit quite a bit so be ready for that!

Ash is a great all rounder – it grows quickly so it is easy to split; there is plenty of it around due to ash dieback and various other diseases. It burns hot and creates a good bed of embers. We use it a lot here at the cooking school as it ticks so many boxes. The bark comes off the logs easily during splitting – it just falls off – and you can use these bits of bark to add to your fire as the oven’s heating up.

Beech is hard and dense so even though it’s straight grained (generally!), it needs a little more welly to split it than alder and ash. Beech burns hot for a long time so is a popular choice and it does leave a good bed of embers.

Birch is grown in volume in the Baltic states as a sustainable commercial crop and is easily bought here in the UK. It burns  more quickly than many other woods, still burns hot and is a useful wood to use in your woodfired oven when you want quick heat. Straight grained so easy to split.  The bark of birch contains a lot of oils which produce black smoke and acrid flavours. Best avoided when cooking but it makes great kindling/tinder.

Apple woods can be bought pretty easily – they are very slow growing and dense and can be pretty knotty so if you can’t split them, add a log to a fire that’s already burning to create a long lasting fire and bed of embers. Cherry, pear, apple are easily bought for smoking and adding flavour but not so readily available for burning in the oven as fuel.

Less well known but very highly prized, hornbeam is becoming more available as a firewood. It produces high heat and a long burn.

English oak is a dense hardwood, used throughout history for buildings and ships. It’s solid so is harder to split than less dense woods and can be knotty. It takes a little longer to get burning than something like ash but once it’s alight, it burns hot and for a long time as well as creating a great bed of embers. We like it a lot, especially when we want to use a Tuscan grill over a bed of embers.  Avoid burning too much of the bark if you are trying to minimise smoke. 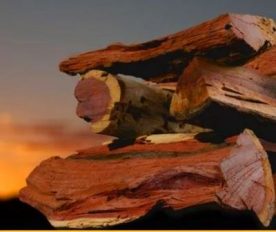 These hardwoods – kameeldoring and sekelbos – are fairly new to the UK market. They grow very slowly and are fairly knotty so difficult to split but come in small pieces from the supplier meaning you can add them to an already burning fire for added flavour, their long burning qualities and for great embers. We used them for grilling in our monkfish recipe here.

That’s it for now – we hope it’s been useful. Let us know what your favourite woods are to cook with.

If you like what we’re doing and would like to support us, you can buy us a virtual coffee on our Ko-fi site – just click here. 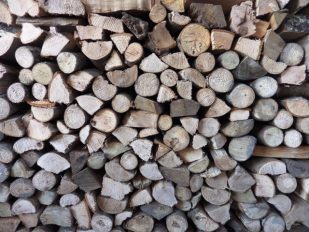 In an hour or so this will be split down, ready for the woodfired oven