Still lots of heat to use in a falling oven – don’t waste it!

One of the pre-conceptions students on our woodfired courses have is that if they can’t see the fire, they can’t do any cooking. In a wood fired oven with a good refractory covering and layer of insulation however, there will still be plenty of stored heat to carry on cooking.

For us, this is when some of the most magical dishes occur – last week we cooked shoulder of goat for 5 hours in an oven with plenty of retained heat but no fire or embers. Goat is similar to lamb but a lot less fatty and this had come from Holly Purdey’s small flock on Exmoor.

In went the goat in an ovenproof dish with lots of sliced onions, garlic, sliced green peppers, a dash of white wine and a pinch of dried thyme, sealed tightly with a good covering of thick catering foil and the door shut. Later that day, out came the most melting meat with a sauce of sweet, reduced, sticky veggies. We took the meat off the bones – to be honest no effort required as we could just lift the bones out of the meat as it was so tender and then shredded it with a couple of forks. This was served up for a gathering of journalists in crisp, puffy, woodfired Yorkshire puds. Delicious!

Slow cooked shoulder of goat in Yorkshire puds – they disappeared pretty quickly once the photo was taken!

At the weekend we had one of our Sunday Lunch Series with friends Jonathan and Suzie from Michael Sutton’s Cellar. They were providing the wine for the crowd who’d come for a relaxing Sunday lunch and we were rustling up the food. Starters of smoked salmon paté with woodfired rye crackers and venison carpaccio with woodroast beetroot were followed by pheasant breasts braised in local cider, bacon and shallots with pommes boulangere and woodroast sprouts. After that we thought they wouldn’t have much room for our marmalade bread and butter pudding with orange and cardamom custard, but how wrong we were; most of them came back for seconds to the panic of the workers! The pud was done in the woodfired ovens too but just using the more gentle, falling heat of the fireless ovens. Here’s what we did (this will happily feed 10-12) – 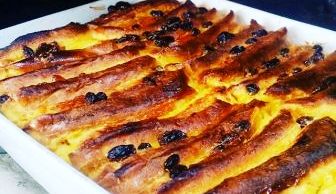