A few years ago, we had an email from a chatty chap called David saying he’d like to come and do a couple of weekend courses with us and could they book in. This was a year before he wanted to come because he was looking to get the best deals on flights – from, er, Tasmania. The response from Manna from Devon HQ was along the lines of “you do know we’re in England, don’t you?” But yes he knew that and David was planning a foodie/walking trip round the vicinity of the cooking school with his wife Elizabeth.

Cooking at the bottom of the world

Scroll along 12 months and we had a great time with them here at the cooking school and were fascinated by their story about living and cooking on the south side of Tasmania (and planting olive groves); about as far south as you can get at the bottom of the world, next stop Antarctica. We’ve kept in touch and when we decided on our new regular blog chat with woodfired friends and how they are getting on, David and Elizabeth were at the top of our list.

Here are the answers to the questions we emailed over –

MFD – Hi Elizabeth and David, can you tell us where you are and a bit about your woodfired oven

E&D – We moved from Western Australia to the Huon Valley in the south of Tasmania in 2002, living for the first 12 years on the west bank of the Huon River where we planted an olive grove and bred alpacas. We had a woodfired oven there made by Mediterranean Ovens in Perth. It was outside in the weather so was only used six months of the year and many times even in summer we had to cook under an umbrella or quickly change the menu to soup and a sandwich. We moved to the eastern side of the river in 2014 and purchased a Zesti oven also from Perth. One of the reasons we chose the oven was because it had a metal outer shell which we thought would handle the weather conditions better than our old one. 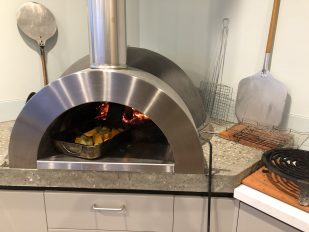 However in a moment of brilliance we realised southern Tasmania was not the Riviera and purpose built an indoor space for the oven, now known locally as the “pizza room”. The best move we ever made as we use the oven 3 to 4 times a week and eat most of our meals in the room, especially in winter. 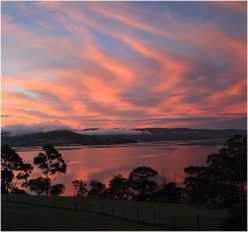 View from “The Pizza room” at sunset

MFD – are you pleased with the oven you’re cooking on? Any improvements you might consider?

E&D – We have been happy with both our ovens and both are of a similar style except for the metal shell.  The Zesti could do with a little more insulation under the oven as too much heat passes into the concrete slab it rests on, but that is a minor issue. Our climate is not that dissimilar to much of England and we find it so much more rewarding to have the oven inside, out of the weather. In our climate it needs to be at least under cover to firstly protect the oven from water and secondly to protect the users from the wind and rain – it is simply a fact of life. Our room has sliding glass doors and windows that can open up to the riverside balcony so it’s much like being outside when conditions suit and we close it up at other times. We are so glad we opted for the inside/outside solution.

MFD – what wood do you use for your oven? Local stuff or shipped in?

E&D – We live by a river, and collect driftwood from the riverbank, mainly eucalypt and acacia. Fallen dead eucalypt branches from our property or along the road make great kindling, as do dried grapevine prunings from a friend’s vineyard. They work fine, especially if you don’t mind the occasional bit of charcoal in your food when the eucalypt explodes at the wrong time!

MFD – what are your favourite things to cook in your woodfired oven?

E&D – Our favourite dish in the woodfired oven is probably some combination of onions, mushrooms, garlic, eggplant, zucchini, cherry tomatoes and red peppers in olive oil cooked in the bottom of a Dutch oven with chicken thighs (bone in skin on) on top.  We take the lid off towards the end of cooking to crisp and brown the chicken.  David has acquired a Tuscan Grill and this gets a real thrashing with steaks, ribs, chicken pieces and anything else you can grill.  Our barbecue is gathering moss! 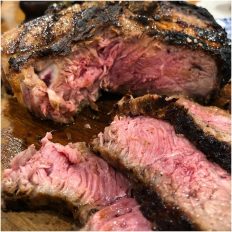 Steak cooked on the Tuscan Grill

We make a lot of bread and use the same dough for all our bread and pizzas.  We make a double batch of the sourdough (from Holly and David’s recipe), and either make two big or three smaller loaves, or one loaf and seven or eight bread rolls, or pizzas, or some combination thereof. We love the extra crustiness and flavour that sourdough adds to pizzas. Raisin bread is the same dough with lots of raisins and some chopped candied peel and toasted hazelnuts added. 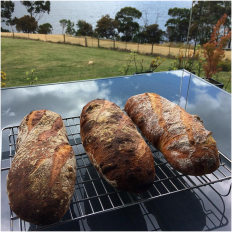 Often after we’ve cooked a meal and while the oven is still hot, we put together a galette of whatever fruit is in season – we’re lucky to live where apples, pears, stone fruit, raspberries and blueberries are plentiful, and with rhubarb from the garden, there’s always something.  We make a base of shortcrust pastry in a rough round shape, pile the fruit, sugar to taste and some slivered almonds in the centre, and bring the edges of the pastry over the fruit, pleating it as you go.  This is a bit fragile to go on a peel so we use an oven tray and baking paper.

We also cook a lot of chicken in our oven.  More than any other meat, we find it tastes so much better in the woodfired oven, probably because of the moisture inherent in the wood oven concept. Whichever cut we choose we always cook it bone in and skin on and it comes out crisp, a bit charred (why would you want it any other way), moist and tender. 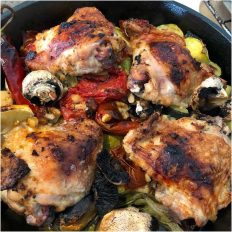 Our favourite pizza is zucchini with blue cheese and red onion, pictured below. We like to think we invented it. 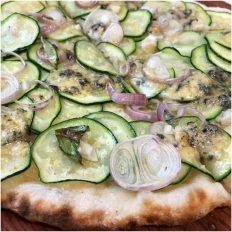 Recently we made twice-cooked goats’-cheese soufflés in the oven, a big success.  These are brilliant because they are easy, you can make them ahead (days ahead if you like) then finish them with 15 minutes in the hot oven.  We’ll put the recipe at the end.

E&D – We have never had any great disasters – for as Holly and David are fond of saying, “what can go wrong?” – but our commonest mistake is not building a big enough fire, especially when we don’t have much to cook.  “We are only cooking a piece of rib so we don’t need a big fire” kind of thing.  We find whatever you are cooking you need to build a reasonable fire even if some of it goes to waste.

We tend to stick to our favourites but the soufflé shows we do get adventurous at times.  We have done fish a couple of times and it was delicious. Must do more. We are visiting South Australia in September and have booked dinner at Russell’s Pizza in Wilunga.  Russell Jeavons’ book on woodfired ovens was our bible when we got our first oven.

We must be doing something right though as recently we had a surprise visitor at the pizza room window – a rare golden brushtail possum, no doubt attracted by the wonderful smells ! 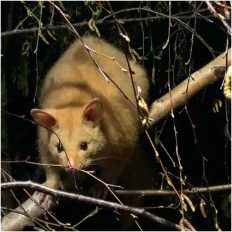 MFD – thanks so much both of you. Great to hear how you’re getting on and we will definitely drop in when we do our great Australian road trip!

This recipe is adapted from one by Sophie Hansen.

Make a béchamel with 55 grams butter, 35 grams plain flour and 280 ml milk.  Cook for 5 minutes after all the milk is added, then remove from the heat.  Whisk in 2 egg yolks, a pinch of salt, some fresh herbs – dill, chives or thyme are good – 60 grams of goats’ cheese and 30 grams of grated parmesan or grana padano.

Beat the 2 egg whites till peaks form, fold into the béchamel.  Turn the mixture carefully into the ramekins, cook in a water bath for 15-20 minutes at about 180°C so that the soufflés are puffed and brown.

Either set them aside to cool and refrigerate till later, or turn them out into a buttered baking dish and pour 340 ml single cream over them. Sprinkle with 25 grams grated parmesan and bake in a hot woodfired oven for 10-12 minutes or until lovely and brown and bubbly.