Thanks to Geoff Armstrong who joined me on the walk today.  Geoff’s wife’s father suffered with MND before his death 13 years ago and Geoff was keen to support the project in his memory.  Hopefully Geoff and his wife will join us again further along the track.

Today’s the day I turned the corner and began heading East.  At about 9am we reached Land’s End, bid the North coast goodbye and said hello to the sunny South. The Atlantic seemed peeved at its inability so far to deter us from our plan and hurled everything it had in our direction. Horizontal rain being blown at you at 50 mph could certainly never be confused with welcoming conditions but by now I laugh in the face of a strong gale (Beaufort Scale 9) and carry on regardless. 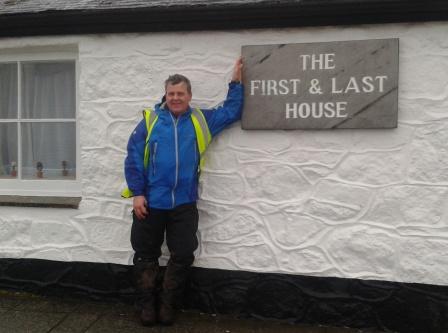 As with every day so far we were confronted by stunning scenery around almost every corner. This is the view over Porthcurno near the Minack Theatre.  What a backdrop for a bit of Shakespeare. 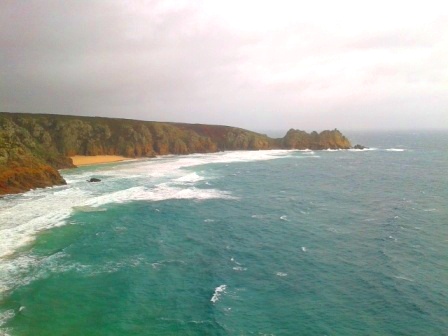 I’m not sure Rex was as impressed by the views as me but he sure enjoyed rootling in the undergrowth and charging into the surf. He’s currently asleep with his bottom in the air and snoring so I guess we might have found out how to tire a spaniel 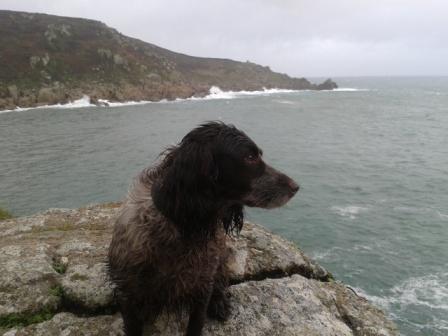 Rex of the Rocks

By late afternoon I’d reached Mousehole where they have the most amazing Christmas lights. Holly met me for a quick change of gear for the last three miles to Penzance –  This was all road so I finished the day jogging in training shoes, a very nice change from my boots.

So far I’ve walked 273 miles and climbed 56,100ft – closing in on the half way mark which we’ll reach in the next 2 days. Time for a medicinal glass of port I think.