It seems that a few last minute obstacles are popping up to try and stop me from completing the challenge and succeeding at least in part.

This morning began with a gentle walk through Weymouth.  Kit Noble has once again joined the walk, this time to see it out and we made good time as we made our way to Lulworth Coves. Some of the paths were excellent, definitely an improvement on yesterday’s mud walk.

Chalky, dry and firm. What a Joy?

Elsewhere much of it seemed to be over crumbling chalk cliffs and the sea below was milky white from the falls. It looked like the sea had had a heavy night and was taking a dose of milk of magnesia. 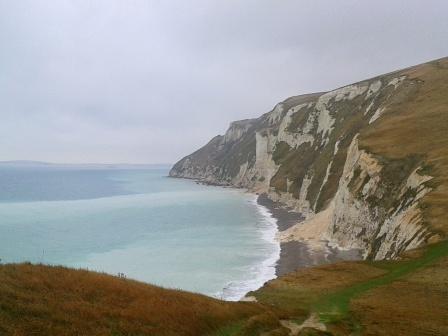 Crumbling Cliffs on the Dorset Coast

Despite the falls this whole section of the coast path was open and by 11.30 we’d reached Durdle Door … 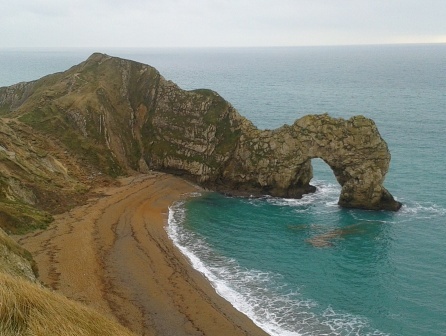 Shortly after this we arrived at Lulworth Cove where, as expected, we were unable to continue along the path due to firing in the Lulworth Ranges. The recommended alternatives are a 13.5 mile walk or a taxi and time dictated that we had to take the lift; so I’m afraid there’s a 6 mile section I’ll just have to come back to.

Our lift took us to Kimmeridge Bay where we were met by friends from Dartmouth, Adam and Helen. Adam would walk with us for the rest of the day. 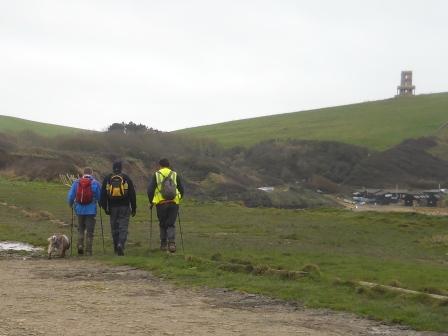 Shortly outside Kimmeridge we came to a sign saying ‘path closed due to landslides’, and threatening a £1000 fine for ignoring the warning.  Well, one set back a day is already more than enough so we carried on regardless. We passed several slips on the way but nothing that really halted our progress and we reached our end point on St Adselm’s Head.

By the end of the day we had just 14 miles to go before the end of the walk.  Sharon, our friend in Corfe Castle is roasting lamb and tomorrow’s weather forecast is looking great.  All’s well with the world.

Without doubt the signposting in Dorset is the classiest on the path, all carved into Portland Limestone … 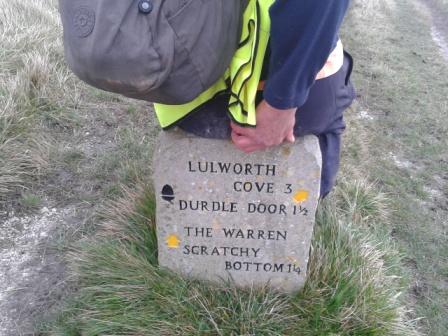 Kit felt it necessary to take the signpost literally