Where Angels Fear to Tread

Whilst in Jodhpur at the lovely Devi Bhawan guest house, I finished the book I was reading and swapped it for E. M. Forster’s ‘Where Angels Fear to Tread’. How apt as this exactly matches our approach to food related research in India.

Before leaving and since we arrived a week ago, we received many a warning about the perils of Delhi Belly and how to avoid it – thanks to you all for your concern. We have however tried all manner of things and not done this to cock a snook at the warnings we were given; we’ve been pretty liberal with the antibacterial handgel it has to be said. However we can’t come out to India on a mission to find out more about the food and, well, not find out more about the food.

We’ve eaten street food, ice cream, fruit salad, veggie salad, rice and meat; and we’ve had drinks with ice cubes in regular glasses instead of bottles. Strictly speaking, by now, we should be at least rendered at death’s door by dysentary or doubled over with stomach cramps but so far the worst to come our way is a cold and a touch of wind. Of course it would be foolish to get complacent, but so far (touch wood, insh’Allah) we have been spared any repercussions from our foolhardiness.

Even on Christmas day we’ve been out seeking gastronomic experiences which other travellers would run a mile from for no stone shall go unturned in the name of research. It started out like any normal day; going for a stroll as far away from the beaten track as we dare.  I remarked to Holly, as we walked past what appeared to be the municipal landfill, that we were probably already more intrepid than 98% of visitors to Udaipur. 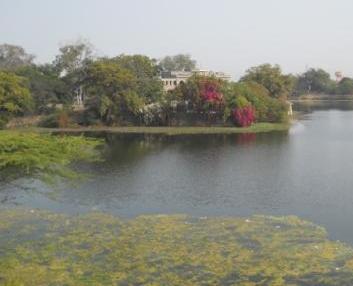 Off the beaten track

After an hour or so (and having left the landfill behind to come upon a lovely lakeside vista and public garden) we met a young man selling sugar cane juice from his cart.  It looked like a smart operation so we decided to try a glass. I know what you’re thinking; the glass is unclean, the press is filthy and he doesn’t wash his hands and that’s pr0bably all true. But we were thirsty and I’ve been wanting to try this stuff; and anyway the whole set up looked like fun and actually pretty hygienic, bearing in mind that nothing dodgy was likely to survive the sugar hit we were about to get.

With some interpreting from a friendly tuktuk driver, we asked him about his business. He buys the sugar cane from the market and paid around £350 for his juicer, the motor of which was cranked up like an old car and looked and worked pretty much like a mangle. He wouldn’t say how many drinks he sold each day – obviously we look like Revenue inspectors. 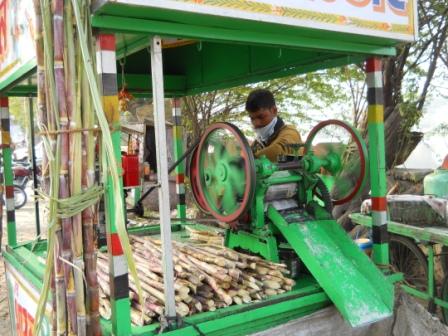 The design may not have changed since 1948. 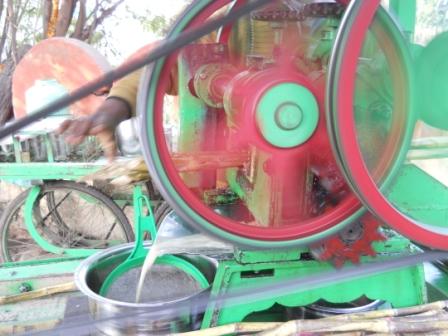 Canes go in, Juice comes out. 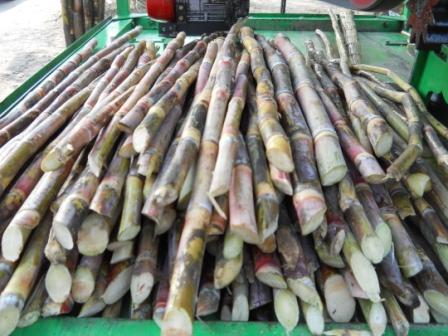 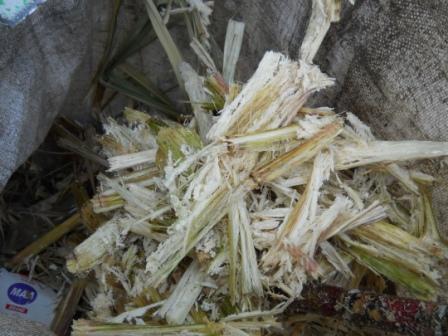 What’s left once the juice comes out

The canes went in one end, got squashed on the largest setting and then were put through another few times on increasingly tighter settings until all the juice had been extracted. He then mixed our juice with a little masala (this one being ginger with some other spices), swirled it around and presented the green juice to us in remarkably clean glasses. Sweet, refreshing and delicious -what’s not to like and phew, we’re still standing 7 hours later. 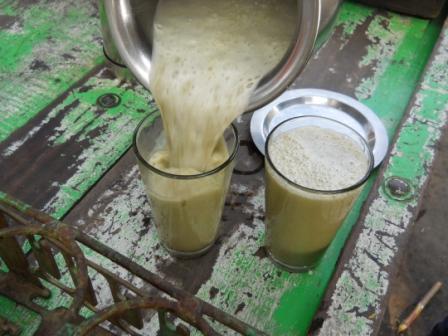