Barbecue isn’t a verb, an event or a piece of equipment…..

When we were planning this trip I hoped to meet some true barbecue zealots. I imagined out of the way shacks with bearded guys sipping beer whilst swathed in wood smoke with entrenched views about the right and wrong way to cook barbecue. Today we met Wyatt, a North Carolina pitmaster who fitted my preconception perfectly and who was also a living embodiment of the sentiment that if you’re going to do something then do it to the best of your ability.

Wyatt took to smoking hogs after realising that, since he wasn’t ‘stoked’ about his law career in New York, he’d be better off using his talents and energy for something he was passionate about.

We were driven out to see Wyatt by our former intern Charlotte. You may remember when Charlotte took over our blog for three months and wrote wonderful daily impressions of her time in Devon with us. We drove through woods near Chapel Hill, North Carolina, looking for his place (tick). The give away was the smell of smoke wafting from behind a house and as we rounded the building we spotted a bearded guy enveloped by smoke emanating from a large, black grill on a trailer (tickety tick)

Wyatt had agreed to let us join him and his business partner Ben as he set a pig to cook ready for an event due to take place about 24 hours later. After brief introductions he initiated the preparations by saying, ‘Right!, lets get a beer and get started.’ (Tick!) We gathered around an already butchered 150lb pig laid out on a work table. Wyatt’s introduction ran something like this. ‘Let’s get something straight; ‘barbecue is never a verb, it’s not a process, it’s not an event and it’s not a piece of equipment. Barbecue’s what you get after the cooking’s done, it’s the end product’. (Big fat ‘do not cross that line’ tick!) 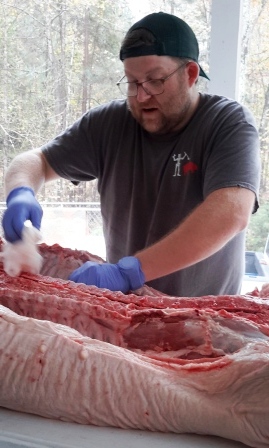 Wyatt then took us through how he prepares a pig for the grill, how using the best, outdoor reared hogs produces barbecue that people remember and come back for and how he sets up the grill using seasoned oak logs burning in an offset firebox to bring the temperature to 225F (just 110C) ready to cook the pig for 12-18 hours depending on size. He shares with us his opinion of competition barbecue, ‘I’ve done it, I’ve won it, and it’s stupid. The guys doing it know it’s stupid but they’ve got nothing better to do'(Tick). Wyatt and Ben only do whole hog pickings, meaning they cook whole hogs, take them to events and pick and serve them right there. It’s theatrical but a whole lot more work than cooking shoulders or ribs. They do it because they believe it should be all about the event, getting greasy fingers is all part of the occasion. 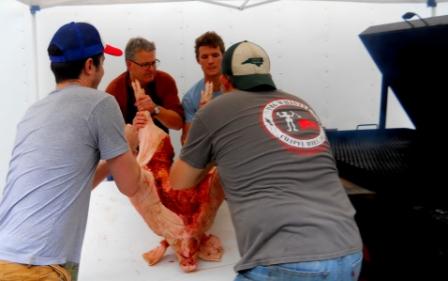 The Boys Shift the Hog

We left Wyatt to keep the grill at the right temperature right through the night. He’ll be up every hour or so to tend the fire, a labour of love which all but the most dedicated would dismiss as too much trouble (Big tick for zeal). 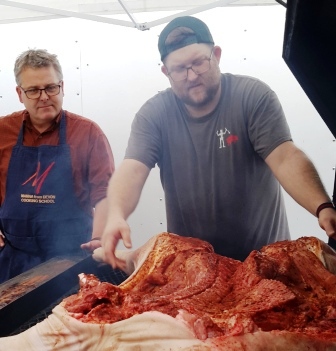 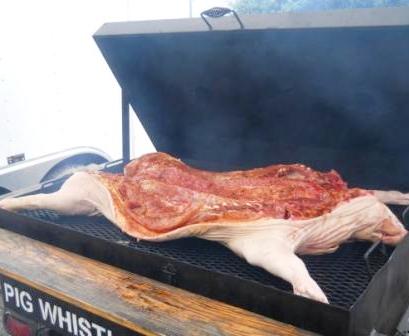 All that’s left to do is put the lid down and leave for 18 hours or so….

Wyatt and Ben along with a third partner who farms their hogs, are opening their restaurant, Picnic, ready for late 2015/early 2016. If they do it to the same standard we were privileged to see today then I’m sure it’ll pretty soon become one of the destination barbecue joints in the Carolinas.