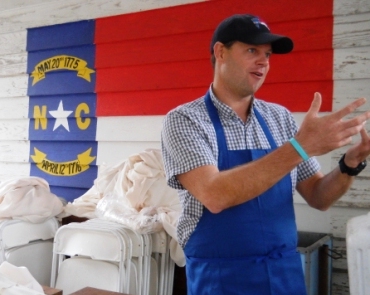 Matthew talks passionately about barbeque and his North Carolina roots

Latest stop on the bbq tour was this morning at Southern Smoke BBQ in Garland, North Carolina. Owned by Matthew Register, the building itself is pretty small in what you could call a one horse town. Originally started as a kitchen for his outside catering service, Matthew now serves takeout lunch on Thursdays and Fridays with people coming from all over the state to eat and they’ll be queueing from 10.30am to make sure of lunch before it all disappears – which it does. In the summer, they’ll cook 42 racks of pork ribs and they’ll be gone in an hour – be quick to avoid disappointment.

Pork butt after 15 hours cooking in the oak smoke

Matthew and his sous-chef Rodolfo smoke Boston Butts (pork shoulders to you and me), brisket, chicken and ribs and serve them with 2 sauces and a variety of sides. It’s become apparent that the sides are as crucial to a barbeque meal as the barbeque itself – typically collard greens, mac’n’cheese, coleslaw (white, red or yellow) and some sweet potato salad amongst many other options. Besides creating excellent barbeque (the cooked meats, remember?), Matthew has made a name for making sides with a twist, sourcing veggies from local farmers. His collard greens will be whole leaves rather than shredded; mac’n’cheese will be made with a penne pasta, a couple of cheeses, some basil and cream; watermelon salad might pop up when in season along with pickled radishes and beets or how about some fresh green beans with bacon vinaigrette – so not something you’ll find on a regular BBQ menu.

Sauces are another crucial component to the meal – there’s the sweet, tomatoey sauce that we know at home, a mustardy sauce from South Carolina and the vinegar based sauce of eastern North Carolina. We knew nothing of these different sauces before we arrived but are now loving the vinegar based ones and particularly Matthew’s – made with cider vinegar and chilli flakes, its acidity cuts through the richness of the pork shoulder. His sauces are now being sold in food stores under the names of Sweet Grace and Two Brothers for his children. 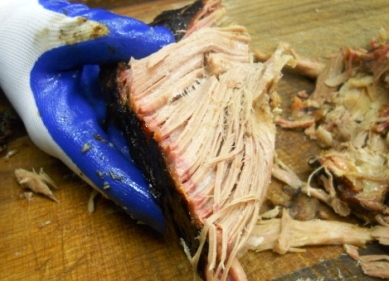 Back with the meat, Matthew had been cooking a Boston Butt for 15 hours in the smoker, fuelled by oak logs, before we arrived. He picked the meat from the bones in big pieces by hand, chopped it in a wooden tray with a large cleaver and then added some – just the right amount – of the vinegary sauce before mixing it in. This is another large part of his success he feels, as many other places do the chopping by machine; his method gives meat with a better texture, not so minced. 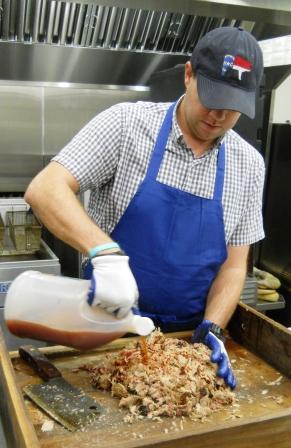 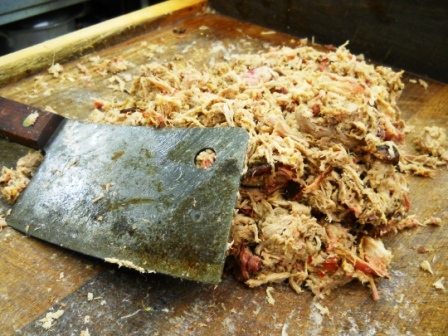 Says Matthew “Great pork with a little vinegar sauce and a bit of smoke, that’s what I want to eat”.  Seems like lots of other people think that too. 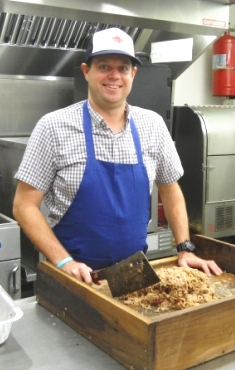 Many thanks Matthew – we’ll be back!