After a couple of days travelling in Japan, one of the things to strike me after visiting a variety of small producers was the longevity of their businesses.4th or 5th generation firms were not uncommon and one blacksmith I met was the 9th generation of his family to run the business.

From sake makers to soy sauce manufacturers and farmers to fish merchants, they all had a line drawing them back to the start of the firm. Now this could potentially be a burden however it seemed to give them a connection to everything that had happened before with a feeling that nothing was insurmountable, that most problems had been overcome in time. There was also a massive shared knowledge passed down from grandfather to father to son which anchored the current generation but gave them the background to try their own way of doing things, developing new markets and building on the past. 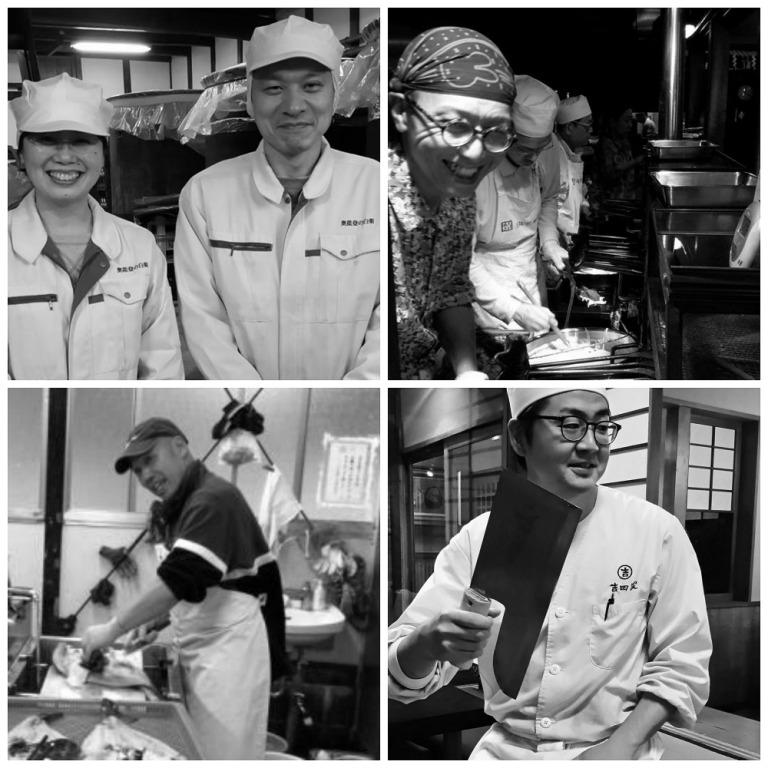 Not only was there longevity in the firms but the people working in them had been there a fair few years too. We met a tuna bidder whose boss had worked at Tokyo fish market for 57 years and was showing no signs of giving up the reins. The owner of a fishing boat had been getting up first thing every morning for 40 plus years and was still planning ahead, working with  his crew, developing a market for his new processing plant and training visiting fishermen from all over the world. One lacquer-ware producer had been in the business for decades and was using lacquer his grandfather had laid aside to mature 50 years ago (this was the first thing he rushed to check after an earthquake destroyed half his workshop). A chopstick maker had been making superb quality and covetable chopsticks for over 60 years in a tiny space in down town Tokyo.

The businesses had something else in common – focus. They weren’t diversifying into different fields; they were doing one thing and doing it really well. So soy sauce makers fermented soy sauce, miso makers mixed miso, rice farmers grew rice – you get the picture. We spend a lot of time as small businesses building a company to sell on to someone else but the Japanese small business takes pride in focussing on one thing and doing it well, for generations.

This is the concept of shokunin , this dedication to a craft, becoming a true artisan, a specialist’s specialist, holding the responsibility until the next generation is ready to take it on. It’s not something we are generally familiar with here; each generation tends to do something different to their parents and within your own life, you could be doing several different jobs. With the exception of Quickes Cheddar who have been making cheese for 14 generations of the same family over 500 years, we couldn’t place many other businesses here with that kind of longevity.

There is a theory that if you are one of 120 million on an island with not much liveable space, focussing on what you do and not getting distracted imbues your life with purpose and a sense of calm. I’m not saying I’m likely to give up the variety of things we do under the umbrella of the cooking school but I will be now practising more focus on what it is we do. No distractions!