In previous Asian travels we seem to have avoided the chopstick option in favour of forks (Thailand) and hands (Laos and India). We used chopsticks  in Vietnam but there were spoons involved too so that’s all doable. From the get go in Japan though it was chopsticks all the way. Not that I’m averse to a chopstick or 2 – in fact I thought I was pretty nifty with them until I got there. 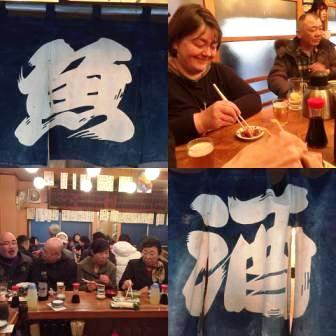 Pretty confident on my last night!

Rice wasn’t too much of a challenge as the Japanese like a stickyish rice that clumps together to the end of your sticks. Moving up a stage from that was wrapping a piece of seaweed around some rice to make a roll and then putting it in your mouth in one movement and with one hand. Definitely more challenging and you had to get the rectangle of thin dried seaweed to warm up sufficiently to bend; too soon and it would still be brittle and break; too far the other way and it is too soft to grip and squashes up too much.

Next stage up was sushi – a reasonably big (5cm) piece of rice and fish so easyish to pick up but do you bite it daintily and risk it falling to pieces or down in one? Mmm – let me think about that for a moment….

Not too difficult to have a stab at sushi – literally

Soup is a big thing in Japanese meals – every meal comes with a bowl of rice and a bowl of soup. You pick the soup bowl up and drink from it; that’s fine. However most soups seemed to come with bits in it which require picking out with your chopsticks first. So you have to pick up your bowl and then chase the things around in the soup and when you’ve caught them, try to eat them without dripping the soup down your front. Little bits of seaweed and pieces of vegetable proved manageable after a day or 2; it was the big bits of tofu that did for me. About 3cm square and nearly 2cm thick, they didn’t seem too challenging. However it’s the (very) soft tofu that is used in soups and however firm it might look from above, at the first grasp, it will split seamlessly in 2, then 3, then 4…. No point trying to stab it either as it will disintegrate from the centre outwards.

Then there’s the whole chopstick etiquette minefield. Those rests that come with nice presentation packs of chopsticks actually have a use; yes, to rest your chopsticks on of course. Please don’t leave your chopsticks balanced on the side of your bowl or even worse, stuck in your food as this is a sign that someone (in fact you) has died. Don’t cross your chopsticks either – neither in your food or when reaching for something and you shouldn’t cross them with someone else’s sticks either unlike fondue when it’s practically obligatory to cross and joust with your forks.

In addition to remembering all this, there’s the when to slurp and when not to slurp thing. Having spent a 4 hour train journey once with a Chinese family merrily slurping their seemingly endless picnic, it would seem a good noisy slurp would be OK. But the Japanese are a quiet and polite nation at least when it comes to eating so generally no slurping. Except when it comes to noodles – the first thing you need to do is grab on to a noodle and then curl them round your chopsticks like spaghetti. Then put them in your mouth without bending over your bowl too much (too greedy) and slurp them up quickly so the ends don’t whizz around the place, spattering all and sundry; a bit of a one-sided Lady and the Tramp. Along with this you need to noisily inhale a good gulp of air with your noodles like a noisier wine tasting session.

Now having had my formative years at a girls’ grammar school where you were in big trouble if you were seen chewing gum, making this noise whilst eating and being seen to enjoy it was almost a giggly step too far. It was also a step very close to choking.  As much as I relished the glorious porky-brothed ramen noodles at the bullet train station and the gorgeously rarefied soba noodle restaurant in Tokyo, I couldn’t suck and slurp with my hosts. That seemed excusable as I was foreign as long as it was followed by a serious “Mmm – oiyshi” (delicious) with much nodding of my head.

The most beautiful breakfast I had on my travels was in a ryokan in Gujo, a traditional Japanese inn. Everyone received their own tray of beautifully assembled tiny plates of about 10 different dishes. Gorgeous to look at but you definitely had to scan it all for simplicity of eating whilst admiring the vision before you. Seaweed salad, that’s fine; local pork sausage, easy; boiled veggies and some marinated fish, bit of a doddle now. Oh Lordy – what’s that; a poached egg; pass me a spoon!! 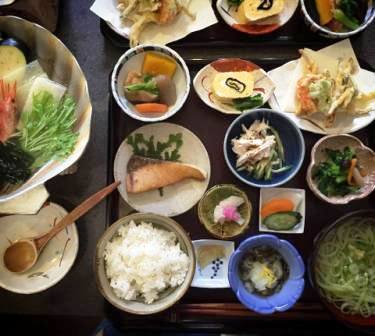 Lots of mini dishes at breakfast & lunch for chopstick practise