Curing Salmon – Making Your Own Christmas 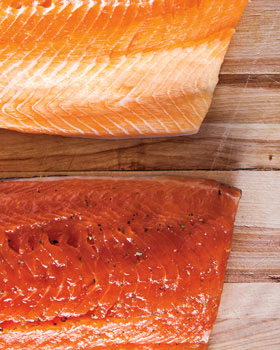 I really like the whole idea of curing fish.

I like that it’s a slow process; one which gives time for reflection and consideration of how important this would once have been to people who depended on fish for their lives and had to preserve it by all possible means.  Now of course we just do it for fun and because it tastes really, really good.

I like that it’s a traditional process and by doing it I’m repeating a technique practiced by many people from many lands for many centuries.  It’s both humbling and comforting to feel connected in some small way to those people.

I like that it’s a transformatory process. Whilst curing the fish changes colour, texture and flavour, just look at the before and after picture on the left. Scientifically there’s a lot going on.  Salt and sugar both pull water out of the fish, changing its texture.  Both then get absorbed into the fat cells of the fish protecting it from further contamination and as they are drawn in so are other flavours in the cure. Alcohol acts as a disinfectant and assists in the transfer of flavour into the fishes cells. Amazing stuff; so stop telling me magic is all just trickery, I really can change one thing into another.

I like that it’s It’s a creative process.  I can be traditional or I can go crazy with my flavours, how about using a peaty malt whisky, why not blueberries, would pastis, lemon and oregano make it taste more Mediterranean than Scandinavian? … you bet it would. 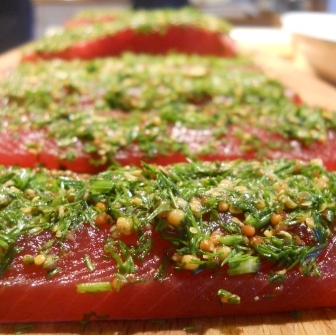 For some reason, and I bet no one really knows why, smoked salmon has become one of those thing we have to have at Christmas.  This year I think we should all try curing salmon for ourselves instead. We’ll all have fun doing it, we’ll appreciate it loads more and we’ll save a ton of money which can be spent on a wine to go with it.  I don’t see a downside.

This recipe is fairly traditional with the beetroot adding a burst of colour.  If stage 1, the actual curing, is too short the cure won’t have had enough effect to actually preserve the fish, too long and the fish will be too salty. Of course the saltiness is a matter of taste and a longer cure will impart better keeping properties. I usually cure for just 24 hours but leave it for up to 48 hours if you like.

Stage 2 is all about adding flavour and no harm will come to the fish if the flavourings are left on.

For the cure simply whizz all of the ingredients together in a blender.

Place the salmon on a large piece of clingfilm, skin side down. Pour the cure over and rub it into the fish. Wrap it tightly in the clingfilm and place in the fridge for 24 – 48 hours.

Unwrap the fish and very carefully rinse off the cure.  Do this by removing most of the cure with the back of a knife then rinse the fish carefully under a gently running tap.  Use only as much water as necessary to avoid the fish becoming watery.

Pat dry with kitchen roll and place the fish on a clean piece of clingfilm. Mix together the flavouring ingredients and spread this evenly over the fish. Wrap the fish in the clingfilm and refrigerate for at least another 24 hours.

Unwrap the salmon.  Using a very sharp knife slice the fish as thinly as possible.  Serve with thin slices of bread and butter or use to make open sandwiches. Goes very well with cold beer or ice cold vodka.

If kept refrigerated the cured salmon will keep for up to 2 weeks.