I’ve only been back in Italy for just over a week now, but already so much about my life has changed.  I presented my thesis successfully earlier in the week, and graduated last Friday, so I am now a Master of Food Culture and Communication!  Officially, the letters that should follow my name are “MFCC”, which as David said, will certainly stump a lot of people.  I’ve spent the ensuing days celebrating and saying farewell to my fellow classmates, and packing up my apartment, which of course has been bittersweet in the way that big life changes always are.  And during all of that, I’ve also been slowly coming down from my time in Kingswear, and processing how it fits in to this strange new position in which I have found myself.   And of course, as I’ve been processing it, I’ve also been thinking about how, exactly, I’m going to blog about it!

As I write this, I’m sitting in my now-empty bedroom, watching my last sunset from my little apartment in Bra.  I’ve grown reaccustomed to looking out the window at cobblestoned streets and the scenes of life in a small Italian city, rather than views down to the River Dart and Dartmouth on the other side.  Now, instead of hills dotted with cows, I see a little church and the Alps in the far distance.  It’s good to be back here, but I am missing a lot about Kingswear, even battling with Poppy for a spot in the window seat! 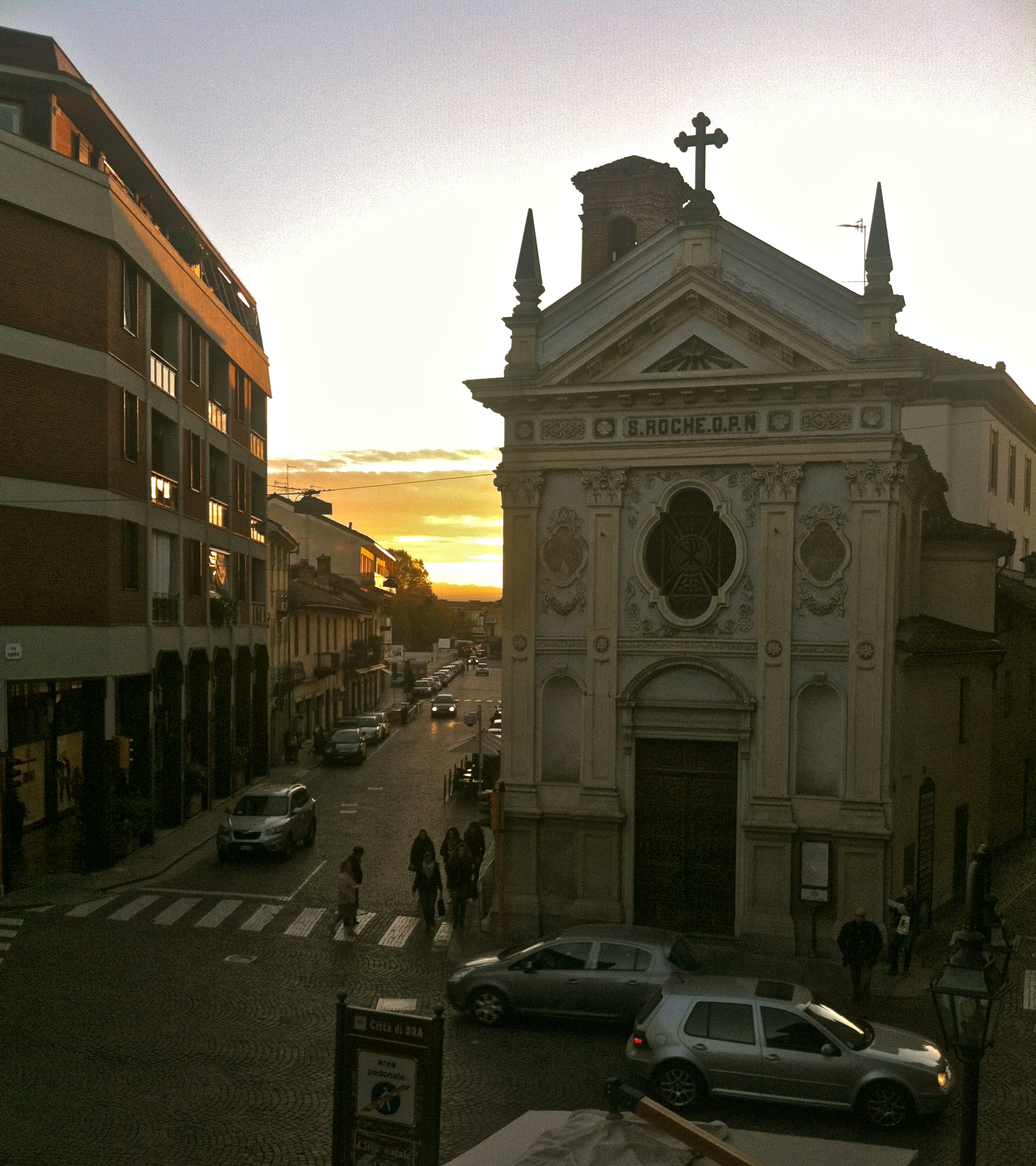 A few weeks ago, I asked you all what you wanted me to write about, and I got a couple of responses asking for a reflection on British vs. American food and food culture.  I’ve been wanting to write that post ever since, but wanted to get it right, so I decided to save it until I could really do the topic justice.  This post, my last one (for a little while at least!) seemed like the best moment to do so.

I noticed a lot of small differences between British and American food culture over the course of the two months that I was living with Holly and David.  We seem to be culturally squeamish about different things: Americans almost never eat offal, so meals involving traditional English black pudding immediately struck me as odd, while when I made suggestions like dipping breakfast sausage into my beloved maple syrup, that flavor combination was clearly off-putting for my English hosts.  Similarly, the thought of making sweets with pumpkin was a concept met with a certain amount of skepticism, while I will readily admit that until about a year ago, the sight of a whole fish made me squirm.  But what was most interesting to me were not the small places in which our tastes diverge, but how strikingly similar they actually are.

This may seem a fallacy to a lot of people.  After all, our differences are well documented and oft discussed, but after spending two months living in Devon, I was amazed that most of the differences we think of are either superficial or stereotypical.  You may call them chips, and we may call them fries, but we both call them delicious.  And indeed, it is nothing more than a generalization to say that all American food is fried or the portions are always huge, just as its too simplistic to say that all British food is boiled and brown.  These may be the stereotypes that the rest of the world still often trades in, but luckily for us, we know better than to subscribe to any of that nonsense.

In Italy, there still exists a culture of buying bread from the bakery and meat from the butcher, and of making each of these stops individually throughout the day.  Food is held in such high regard that the forces of ease and convenience have been slower to penetrate mainstream food culture.  But change has started to creep in, prompting the start of the Slow Food movement here in 1986.  Both Americans and Brits have taken the ideas of Slow Food and run with them. The thing that both the UK and the US have, for better or worse, is that we’ve already gone down the road of developing a huge, industrial food infrastructure and are coming out the other side.  Of course, in many places in both of our countries, food quality and the knowledge of the food chain is still abysmally low, but I would argue that the level of food issue-related consciousness is higher in the UK and US than it is in almost any other place that I’ve witnessed.  This means that there is an extraordinary amount of thought and creativity going into building projects that will help our food cultures, and our food economies, become more healthy and sustainable.

The other thing that we share is our culinary sense of adventure.  Our histories, the US as the proverbial “melting pot” and the UK as an imperial power and center of trade have created similar culinary traditions in which “tradition”, as it were, is a fluid and adaptable concept.  In older, more fixed styles of cooking, say French or Italian, things are made the way they are made, with very little adaptation for taste or modern techniques.  This means that many traditional preparation methods are protected, but it also means that there is a certain sense of fun missing that comes with playing with unusual flavor combinations and other forms of culinary experimentation.  This is something that I think both Brits and Americans do very well.

As it turns out, we’re not as different as we think we are.  This, to me, is a comfort.  I’m grateful for my two months in Kingswear for so many reasons, but this is the most important one.  Now, as a newly-minted “gastronome”, with so much about the food world that I think needs changing, it makes me feel optimistic to know that there are so many innovative projects happening on both sides of the pond.  I want to thank all of you, and especially David and Holly, for making me feel so welcomed and at home while I was in the UK.  It couldn’t have been a more perfect way to start to think about the practical applications for all of these concepts I’ve been discussing in class all year.  Devon is an amazing place, and I can’t wait to come back to see you all!