Of Donuts and Gin: Dartmouth Food Festival Through My Eyes

Well you’ve been waiting for it, haven’t you?!  Ever since Poppy promised I’d be posting some reflections, I’ve been under the gun to put some sort of coherent reflection together, but I really haven’t been able to until now.  Thanks a lot, Pops!

In all seriousness, it has taken a couple of days to really process everything that happened at the festival.  Firstly, because I was so tired in the days following the festival to process much of anything, and secondly because I had family bread course to teach and a thesis to write and I was really putting about as little thought toward the festival as possible until I was well over all of the other hurdles.  But I’ve had a few days now and a bit of mental space and I think it’s reflection time.

I honestly had no idea what to expect when I came here two months ago to work on the food festival.  I thought I’d be running backup, behind the scenes, serving some tasters and sending some emails.  Then I got here and I learned about how big it really was, and how many different things actually go on, and Holly and David asked me to organize Eat Your Words and suddenly I has hit the ground running without ever really realizing it.  I couldn’t have been luckier, really, to be working with two people that trusted me enough to challenge me with a big project, and who were always supportive, always there in case I needed it.

But enough about me.  What’s amazing to me is how different the festival can be for so many different people.  It is so multi-faceted, with its various events and workshops, demos and seminars.  There are the countless food stalls and the festival bar, there is the more educational area in Avenue Gardens and of course the literary sub-festival over at Eat Your Words.  And we can’t forget the omelette Olympics! 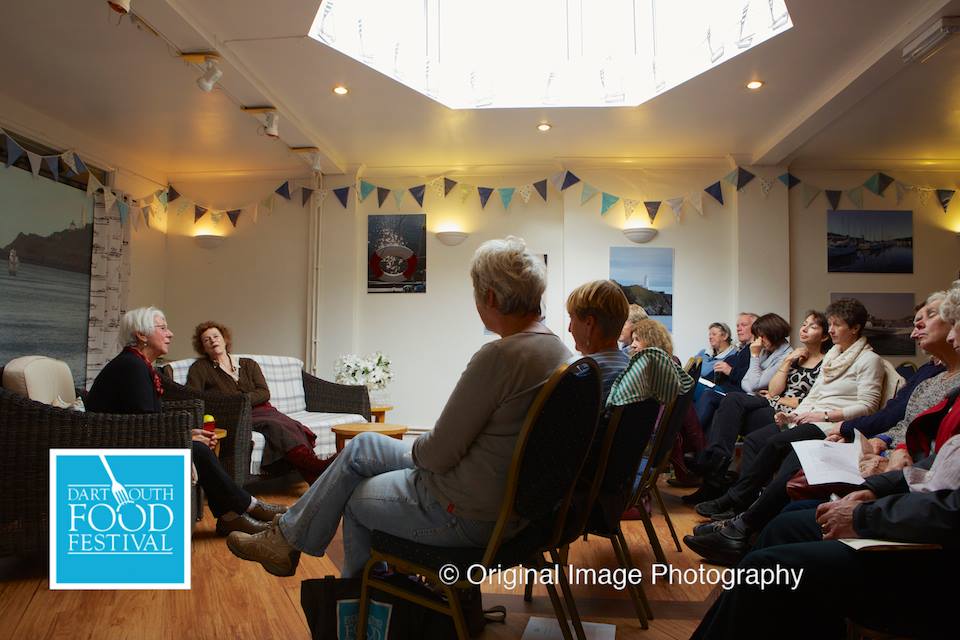 And this is it’s value, really.  This is what makes it more than just a “glorified farmers’ market”, as David so wryly pointed out in today’s edition of the Chronicle.  The Dartmouth Food Festival is something to talk about because it invites people to do more than just taste good food and drink good wine.  It also invites people to think about food, and to try to understand food, and to explore new foods.  It invites people to learn, to not be content with just the knowledge that they have, and this is, in my opinion, one of the most important points of all.

There was a lot of the festival that I didn’t get to see, so I can’t speak much for how crowded it was on Saturday at lunch time or for how any of the chef demos were.  The longest time I had to wander around was on Sunday morning, just before the Kingswear Landladies took the stage in the Flavel.  It was still quiet then, with most of the festival guests taking an extra hour in bed, I presume, after a long food festival Saturday night.  It was peaceful, but as I walked through Avenue Gardens there was a palpable buzz in the air.  Not hectic, not stressful, just pure energy, as though I could reach my finger out and feel a little zap right there in mid air.  I love that.

Later that evening, after closing down the last of the Eat Your Words chats and packing up the Yacht Club for the last time, I was walking down the Embankment past the festival bar and noticed that they were already packing up.  St. Jude’s was coming after all!  I scurried in, having wanted to try Tarquin’s Gin all weekend but never getting the chance.  They had stopped serving but took pity on me because I clearly looked pathetic and like I needed a drink, so I mercifully got my gin and tonic (which was excellent, by the way, you should all try some of his gin) and continued on my way to find the clean up crew.  Of course, though, I had to stop into the Manna tent for a brownie, and then Cat appeared moments later with some leftover cardamom donuts from the Landladies brunch, and what had started out as a desperation cocktail had turned into a full on post-festival moment of indulgence.  With a donut in one hand and a brownie in the other, I couldn’t help but think to myself: “this couldn’t be more perfect.”

Each of us have our own festival, so I won’t bore you with any more of the details of what went into mine.  What matters in the end, what we all share, is the energy, and that feeling of knowing that we are all sharing in something that is so much larger than the sum of its parts.  It was an extraordinary weekend.  I can’t wait for next year!