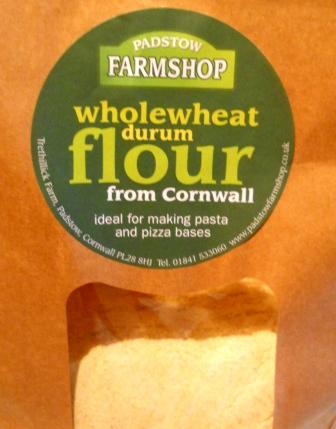 16:30  Did you know that Durum Wheat is grown in Cornwall.  no, neither did I  until we went to Padstow Farm Shop today where they grow it and turn it into wholewheat pasta. In the shop I was told that even though the flour is good for both pasta and pizza it isn’t good for bread.  Having made 100% durum wheat bread many times before and given that both pizza and pasta (especially pizza) need plenty of good quality gluten I decide a bread lab was the only way to go.

The flour I got (given actually as I explained my plan to the people in the shop who were keen to see if I could successfully make bread) is wholemeal and a beautiful golden colour.  It;s also very gritty to the touch which makes senses as durum wheat is very hard and will always feel gritty or grainy rather than soft but in this case it;s also because it’s fairly coarsely ground. Because of it;s hardness durum wheat can be ground very fine indeed as in ’00’ flour, the finest grind of all.

At 16:00 I mixed three dough, one at 60% hydration, one at 70% hydration and one at 80% including about olive 10% oil.  After 15 minutes I added salt and started to knead but all were much firmer than I wanted, this flour is obviously more absorbent that others.  I added another 10% to each mix and all seems to be as expected, coming together as a dough and developing some spring.  More in a bit. 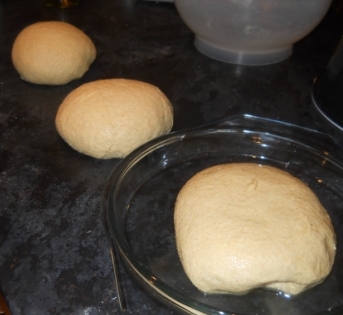 17:10  here we are! Three doughs mixed and half needed.  The one nearest is fermenting on oil, hence the dish. That one will become foccaccia, all being well.  One more knead in a bit for the firmer one and then a windowpane test will tell us if there’s much hope at all.  The sheer grittiness of the flour may be a problem.  I’ll post a photo of the test. Bet you can’t wait for that?

Whenever I’ve used durum flour in the past it’s been refined and makes a really bubbly textured bread, no problems at all with lack of gluten.  And if you want to make Neopolitan Pizzas then you have to use 100% durum 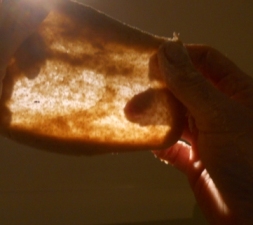 17:30 We have a windowpane … it took quite a lot of kneading to get one and it definitely has a wholemeal feel to it, i.e a bit fragile … but it’s there for all to see.

Now I’ll leave the 60% (which became 70%) for an hour, give the other two some stretches along the way and see how we go.

18:45.  The doughs have all had 1:15 and seem to be doing everything well. The 60% (70%)  is fully risen and I’ve now knocked that one back and it’s resting before final shaping.  The others have had a couple of turns and won;t get knocked back in the hope that I can open the texture a bit, although I’m not holding my breath given the wholemeal flour. 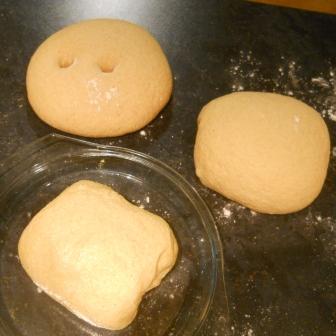 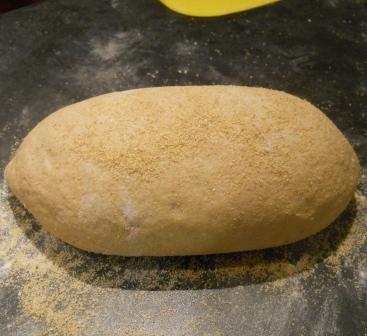 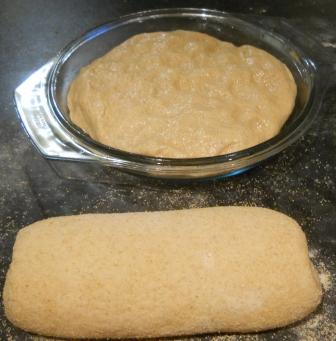 19:30.  The firmer bread is in the oven and looking well risen already.  The other two doughs are shaped and ready for the oven in about 20 minutes.

This is a quote for the wikipedia page about Durum wheat,   ‘When durum flour is used as the sole flour in bread, substantial additions of isolated wheat gluten are necessary to effect rising. Without it, 100 percent durum wheat breads are often heavy, with very close grain, and will split easily when risen for baking’. So far none of this appears to be true …. that’s wikipedia for you.  Or maybe Cornish Durum is better than all he rest.

First loaf is out, looks fine.  not massive oven spring but at least as much as I’d expect from a regular wholemeal loaf. The intermediate hydrated loaf is in and the foccaccia ready as soon as the oven is free. Gallery of all the finished loaves will follow shortly … stand by! 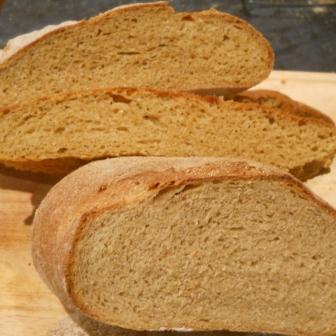 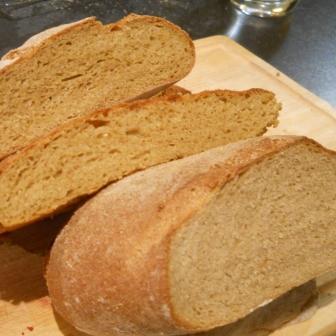 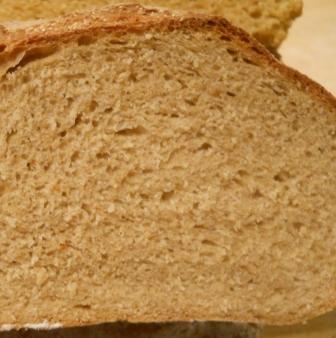 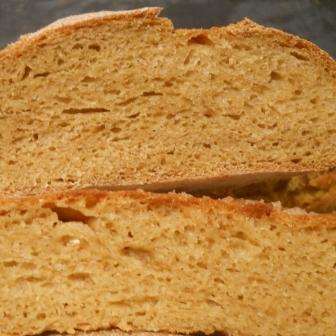 The firm dough rose well, was light, held its shape perfectly and would be acceptable absolutely anywhere.  the intermediate dough hydrated at about 80% and stretched did open up a bit.  The foccaccia dough hydrated at 90% including olive oil has a lovely moist crumb.  I may have over proved that one a bit and think it may have risen more had I got it into the oven sooner.  The crumb in each case was close and closer I expect than a regular wholemeal, but not heavier.

All the breads taste fantastic. Really sweet and very nutty in flavour, reminiscent of spelt with none of the bitterness of some regular wheats. I hope Padstow farm shop like the breads when I drop them by tomorrow and I hope they start making some bread with it; it’ll definitely be popular.