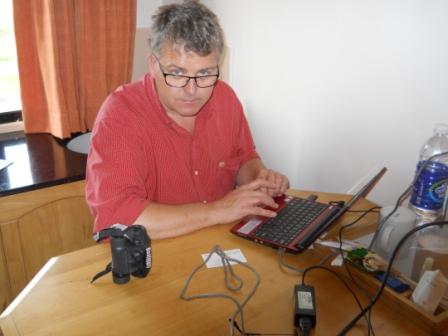 Yesterday Holly posted her final blog from India and tonight it’s my go. As I type we’re sitting in Indira Ghandi International Airport waiting for our 02:05 flight to Zurich and thence to London. IGI could be almost anywhere in the world.  From where I sit I can see W H Smith, Costa Coffee, Benetton and a host of other global brands; a far cry from the gazillion tiny set ups we’ve encountered on our trip.

We’ve seen businesses which comprised a hand pulled cart of peas, a suitcase of bangles, a bag of tools for mending shoes and who can forget the beggars with weighing scales. The most memorable ‘business with premises’ I saw consisted merely of an open door leading directly to a flight of stairs on which were stacked a few meagre provisions; et voila! a shop. Enterprise is everywhere.  In a way it’s refreshing to see so many people getting off they’re butts and doing whatever to earn a crust. On the other hand it’s tragic to see urban areas sprawl unchecked for mile after mile as businesses are set up along every available road.  Perhaps there is some planning authority managing all of this but I seriously doubt it on the evidence presented. Having seen so many amazing sights in the last month I am sad to see it squandered for want of the political will to manage growth for the long term.

But enough of me getting maudlin. Our last day has been great fun and we’re still able to discover new and exciting things to eat even after a month. We left Kerela at 7:00, arrive in Delhi at 10:00 which gave us plenty of time for a last whistle stop tour of the city. Luckily we had a great guide for the day. Many of you will of course remember or erstwhile intern and blogger Charlotte.  She was studying in Italy with Tanya Singh who has since returned to Delhi and, although she didn’t know us from Adam, had agreed to take us to some foodie hot spots.

After a mega auto-rickshaw ride across town we popped into a little place famous for it shawarmas. These little wraps of spice meat or vegetables are a Muslim speciality from Turkey, Iran and Afghanistan and have much more of a Middle Eastern Flavour than an Indian one. We followed this with a mutton (goat) biryani; very fragrant with lots of black pepper and cloves. Then we popped around the corner for a kulfi which we hadn’t eaten before as we had actually followed the advice of not eating any kind of ice cream from street vendors or premises of unknown reputation, but we were assured this one was good and safe. Kulfi is made with the very condensed milk called mawa which we’d come across before and this one was flavoured with saffron and pistachio and tasted perfect.

A move across town and a short walk and we were ready for another snack.  This time we found a Tibetan/Nepalese place called Yeti where we tried the momos (very like dim sum) and a steamed bread called kingmo.  This was like a large dumpling; soft and a little buttery and great with the bowl of hot and sour broth the came with it. 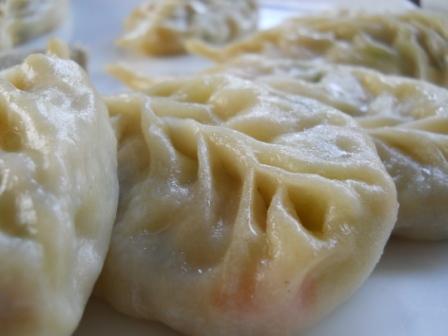 Momo’s don’t look like much but they are the best! 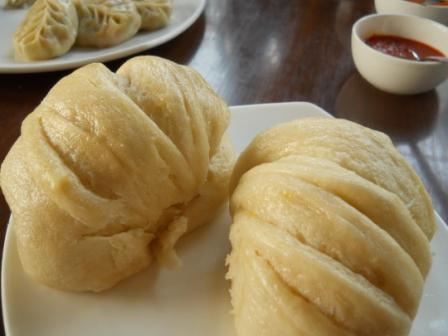 Another tuk-tuk and we were in a spanking new mall sampling pani puri; little puff balls filled with potato, tamarind chutney and a coriander and mint sauce. You fill one of the puffs and then pop it in whole. Tanya once ate 42 of these in a sitting; apparently it’s what competitive people do at weddings.  That was about as much snacking as we could manage but it was a day of memorable food and great company. 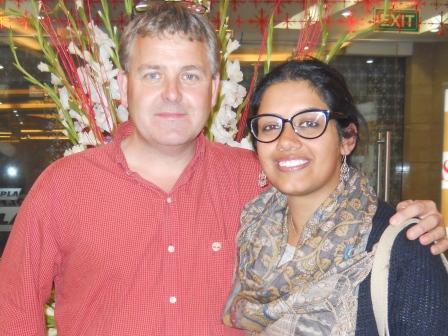 With Tanya after a hards days snacking

We’re now settled with a cup of black tea waiting for the flight home. In hindsight, although it seems like we’ve done heaps, we’ve only really scratched the surface of India. Bengal sounds like somewhere I’d like a lot and I’m sure Madras would be fascinating so I don’t think we’ll be able to ‘leave it at that’.

See you all soon