Sunday was a lovely day spent damson picking with Holly, David, Rex, Poppy, and friends.  We were in a small orchard next to a pen with some funny little pigs who were running around, eating any apples that fell off of the neighboring apple trees.  It was an absolutely idyllic scene, with the rain clouds giving way to sun just as we reached the orchard.  It felt great to get outside and pick from fruit; we do a lot of fruit picking back home at this time of year also, so I was really happy to get my fill! 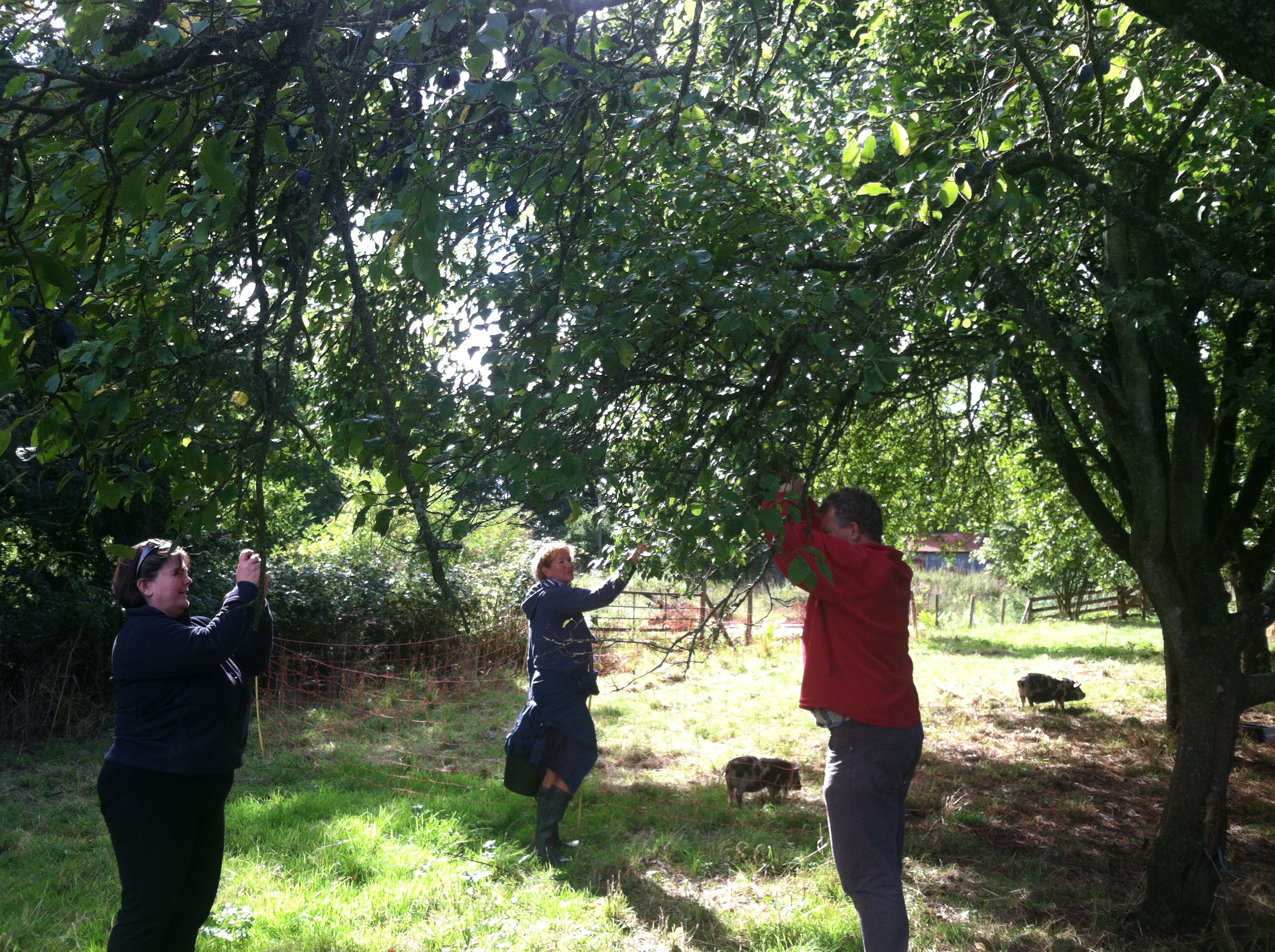 Pulling down some damsons.

We don’t have damsons in America, so I admittedly had to Google what they were before setting off for the day.  For those of you who, like me, aren’t all that familiar, they are small, purple, plum-like fruits that have a bit more of a bite to them than many other stone fruits.  When we went to pick them, they were ripe but not quite ready to fall off the tree, meaning that they are perfect for making a delicious jelly without the cloying sweetness that many jams made with overripe fruit are plagued with!  We’ve come home with a veritable glut of fruit, and Holly has already cooked up a batch of damson jelly, and spoiled us with a dessert of damson fool last night.  Below, I’ve posted instructions for doing both, which should make you want to get out there and pick some damsons yourself.  Want to make some bread to go with your new homemade jam?  Come to our free Sourdough Surgery on September 24 to get some pointers!  They’re coming in to peak ripeness now, so grab a bucket and get picking! 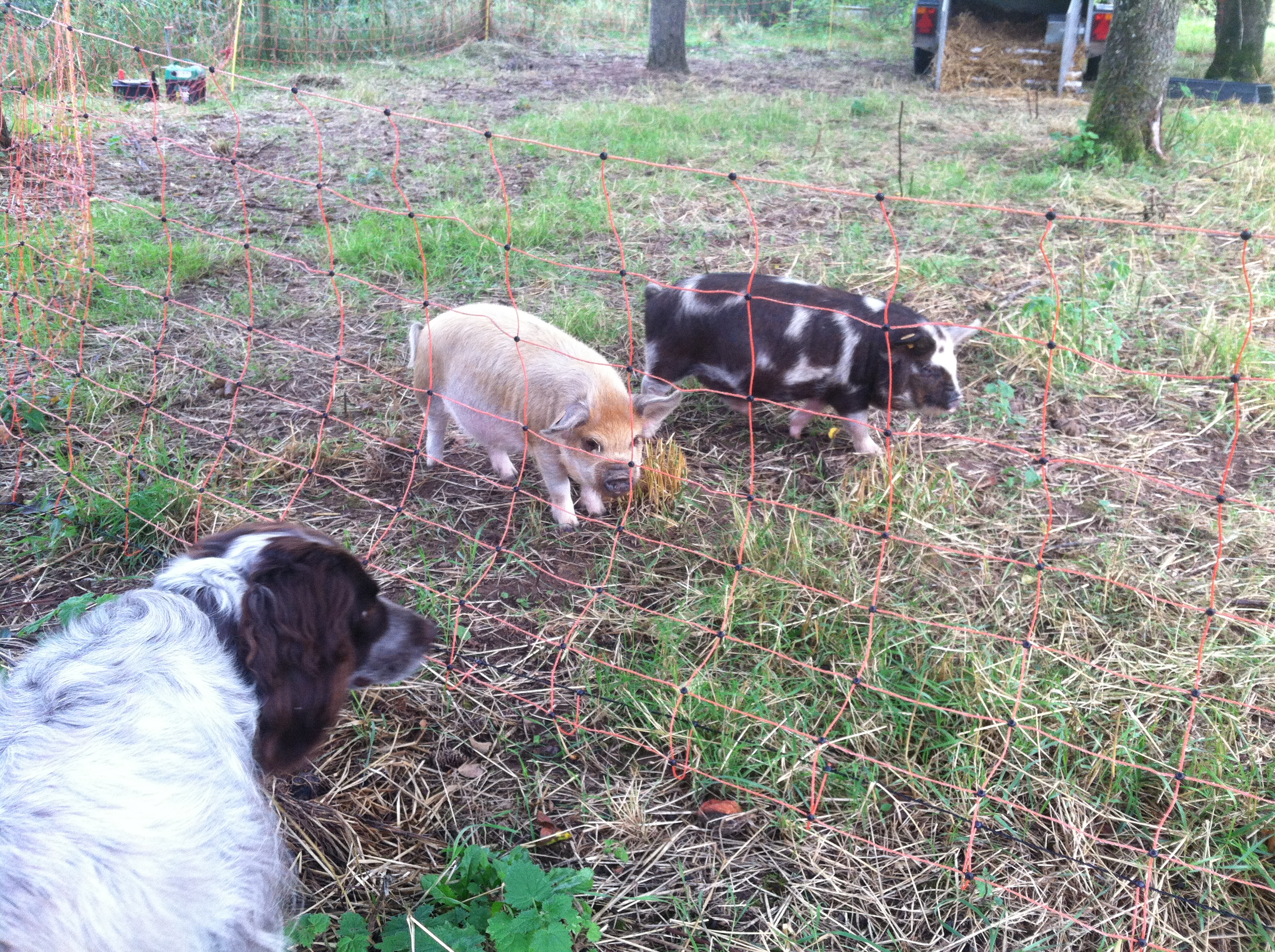 Rex is not quite sure what to make of these pigs. 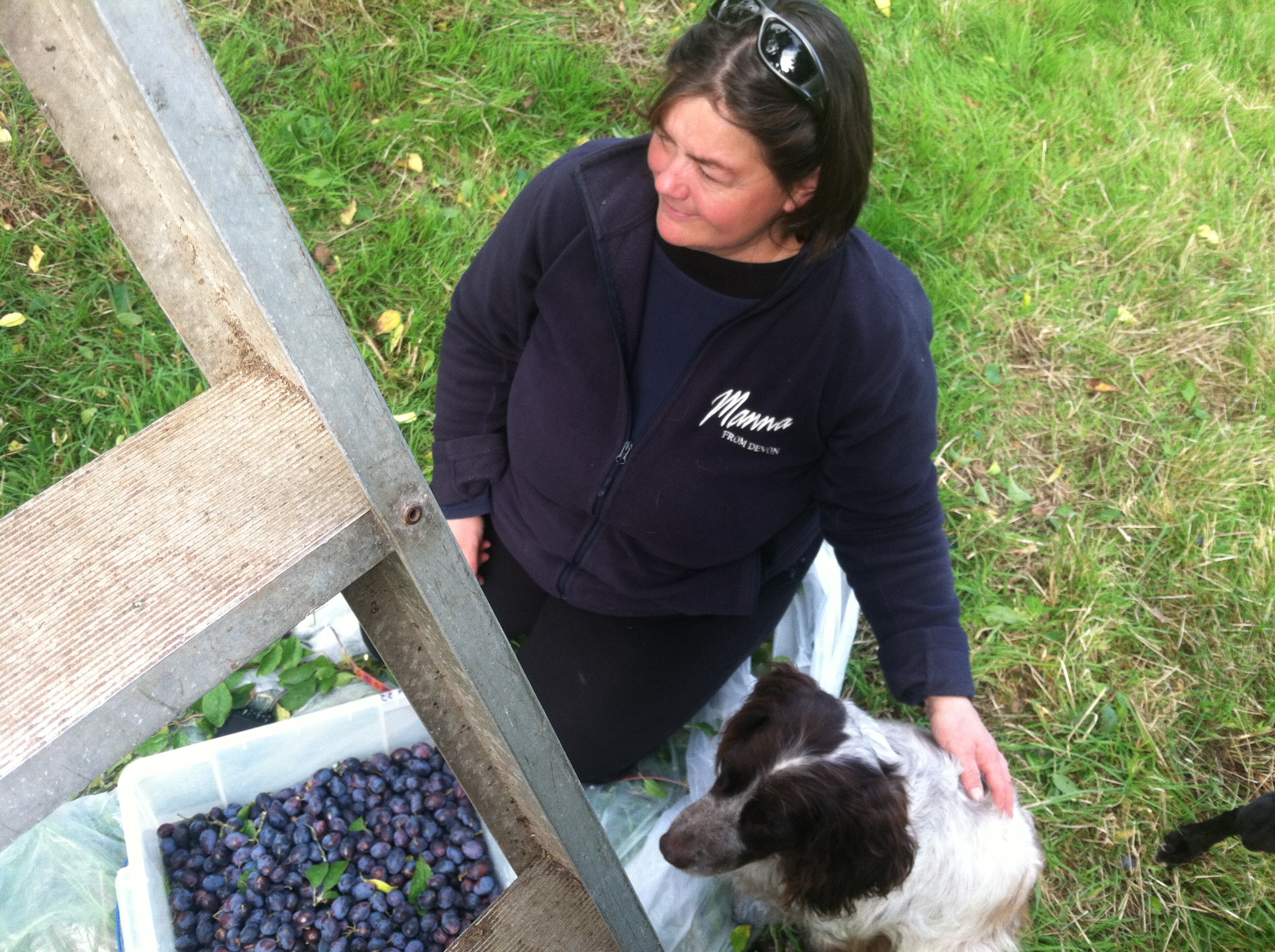 Holly and Rex take stock of our inventory. 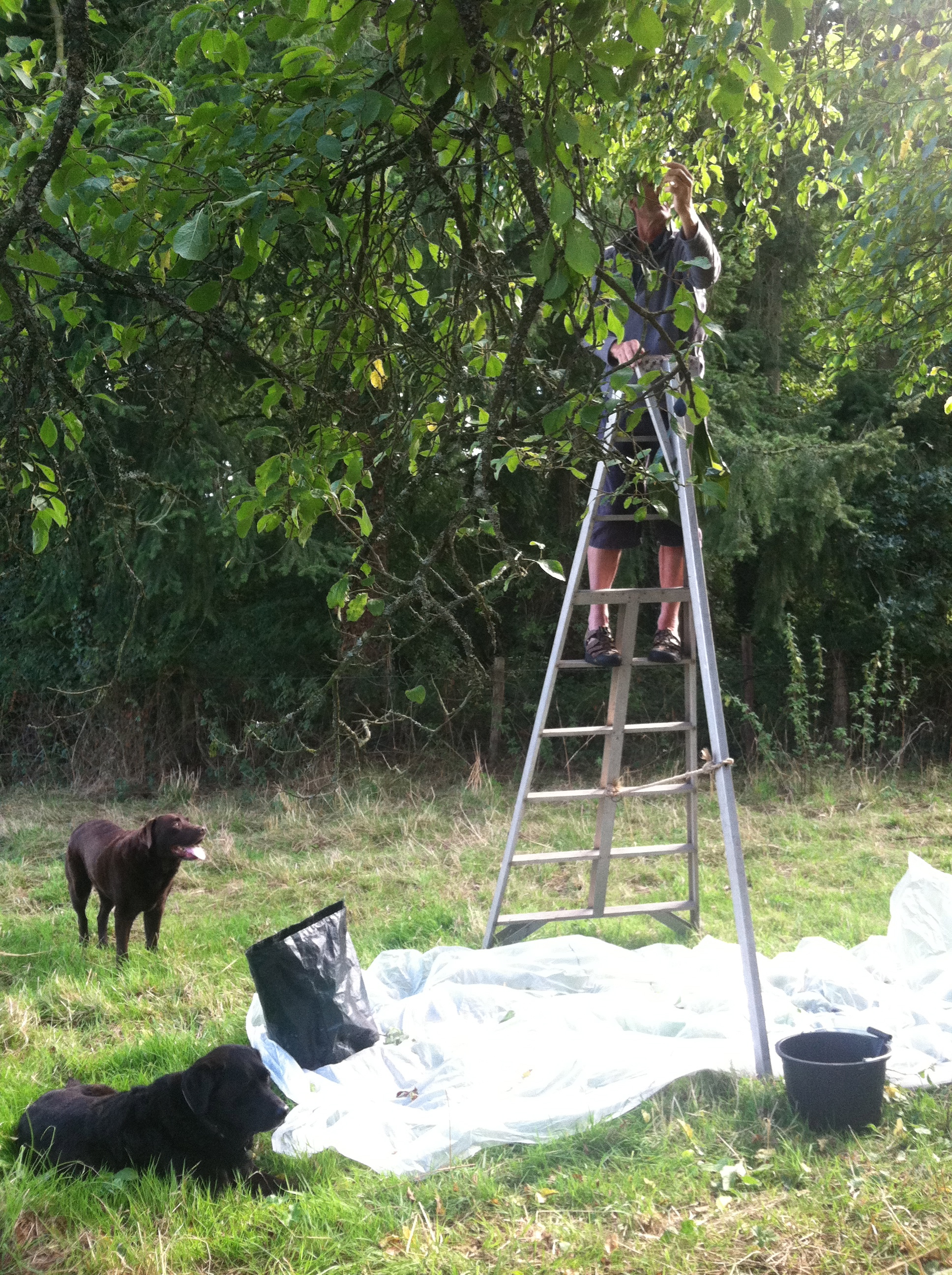 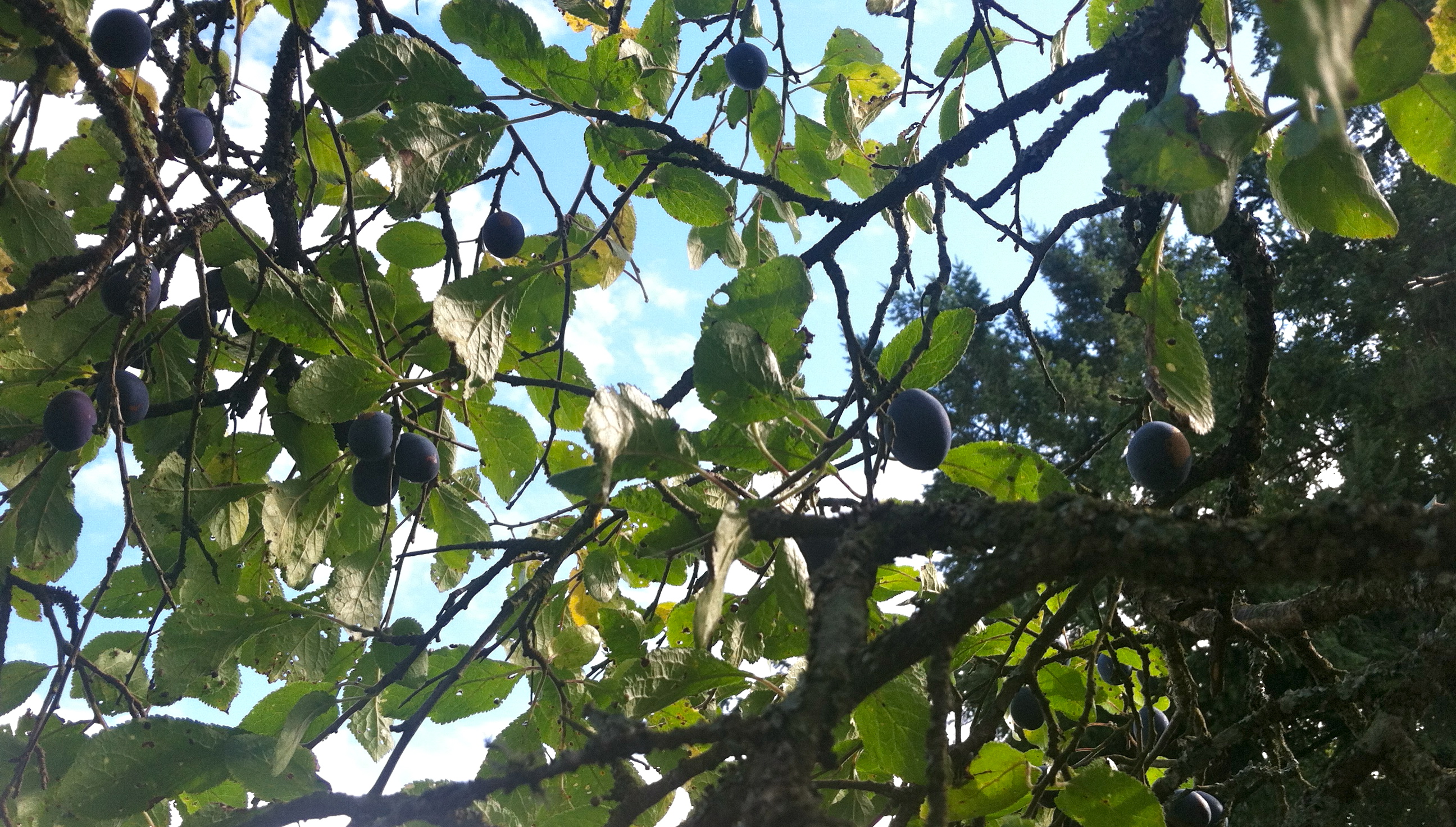 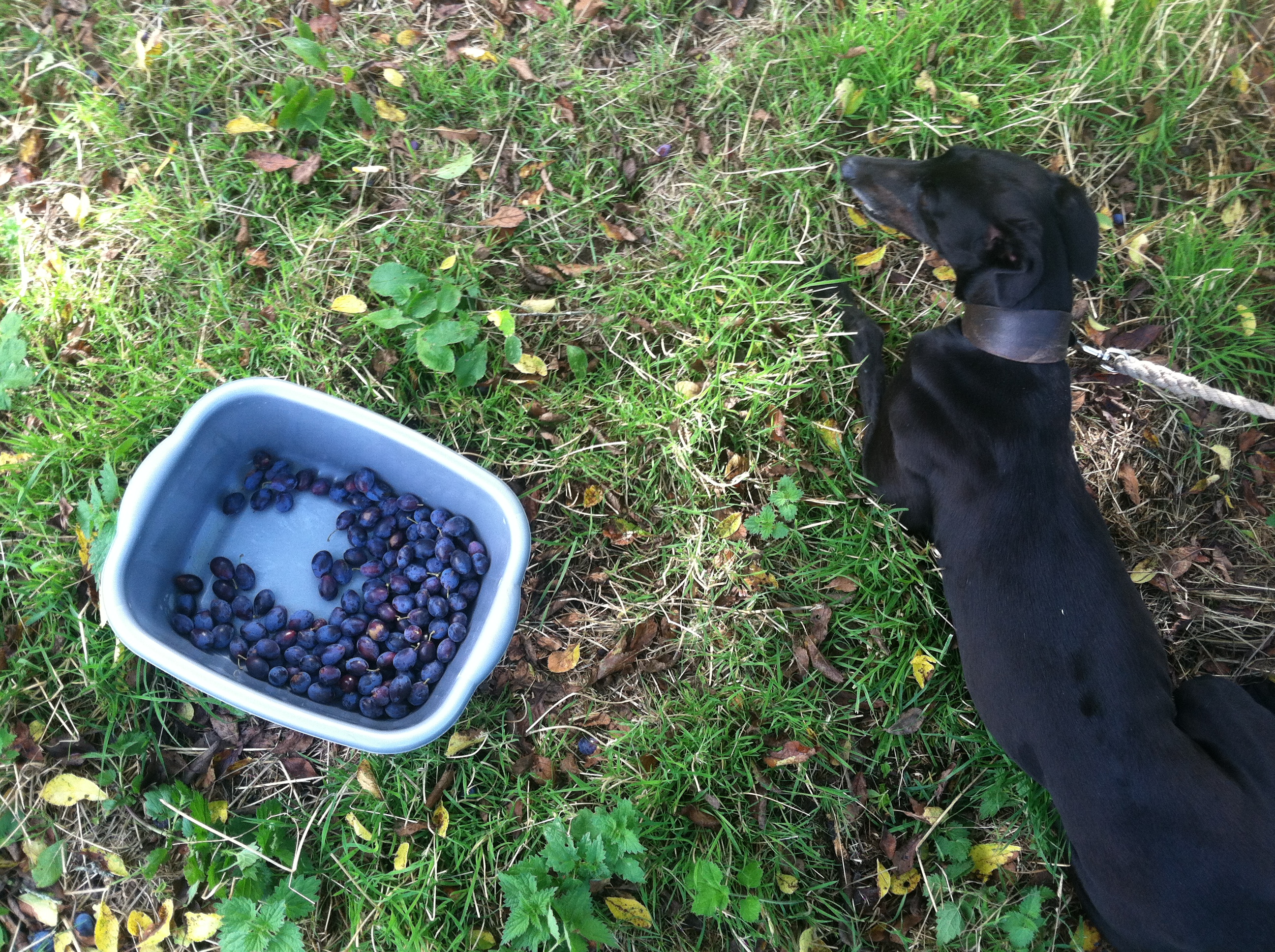 Poppy plays guard dog. No one’s getting their hands on our damsons.

Put 2.7kg of damsons and 2.7 liters of water into a large stainless steel saucepan and bring to a boil.  Cook for about 30 minutes until reduced to a pulp.  Pour the pulp into a jelly bag and allow to drip until all the juice has been extracted.  It’s very important to resist the urge to squeeze the jelly bag at all, or the jelly will become cloudy.  Holly let hers sit in the jelly bag overnight, to make sure all the juicy goodness had dripped through.

Measure the juice into a pan and measure out 450g of sugar to each 600 ml of juice, but don’t add the sugar yet.  Warm the sugar on its own in a low oven.  Over on the stove, bring the juice to a boil, and add the warmed sugar.  Stir over a gentle heat until the sugar is dissolved.  Increase the heat and boil rapidly without stirring for about 8-10 minutes, until it has reached its setting point.  You can test whether it has set by placing a small saucer in the fridge for at the beginning of the whole process.  To test, place a spoonful of the liquid on the cold saucer and return it to the fridge for 5 minutes.  If the jelly is wrinkly when you push the edge with your finger, it’s set.

You’re done!  Pour the liquid into sterilized jars and allow to cool.

First, make a damson compote.  Start by placing 400g of sugar and 450ml of cold water in a saucepan, and bring to a boil.  Slowly add about 900g of fruit, cover the saucepan, and bring back to a boil.  Simmer for 4-5 minutes until they begin to burst.  Turn into a bowl and allow to cool.  You’ll need to sift through at this point and pick out all of the pits, which can be a messy and tedious job (I wore plastic gloves to prevent looking like I’d contracted some sort of strange skin-staining condition).  Make sure you have something good to listen to while doing so!  Don’t worry about getting the pulp out.  It will make for a nice texture contrast with the cream.

Once you’ve picked out all the pits, whip up a mixture of equal parts custard and double cream, and fold it all together with the damson compote.  Holly served hers in tall wine glasses, and topped each one with a bit more compote.  Perfection!