Mumbai is not what I expected. Not at all. After the cities we’ve visited so far I was ready for more of the same; uncleaned streets, hundreds of dogs, not much evidence of industriousness, and a mix of cows, tuk-tuks, motorbikes and carts clogging up the streets. That description does not fit Mumbai.  Here there is an air of business; even on the weekend people walk purposefully, even if they are only heading to the park to play cricket. The streets are well kept and traffic, although very congested, flows with at least some semblance of order. Some management of the cow and dog population must have taken place as they are few and far between.  Although the slums here are some of the biggest in the world it is also clearly a prosperous city.

There is a much more cosmopolitan air here; big brand shops, western dress, recreation and, interestingly for me, lots of bakeries.  Now since we got here I’ve eaten plenty of chappattis, parathas and other fine flat breads but at no point have I ever thought, ‘that’s it! no more yeaseted bread for me’. So how exciting to see that these bakeries have windoows stacked with loaves, buns, cakes, pastries and biscuits. 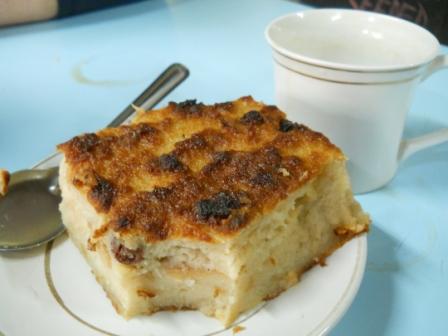 We found one of the most famous ones in the old town – The Yazdani Bakery – which took over a Japanese bank in the late 1940s and has been busy baking ever since. Even better, they use a wood fired oven so after a chat with the founder’s son Rashid, we were shown round the bakery and tasted some of their goodies – Shrewsbury  biscuits, Bun maska (sounds exotic but is in fact a buttered white bun) and cardamom flavoured bread pudding along with the obligatory chai. Whilst we were in the café, the sales counter was non-stop. It turned out Rashid had been a chemist in the Leicester Square branch of Boots and consequently he was very proud of his health product – a German inspired multi-seed loaf from the bakery including bulgar wheat, barley,  poppy seeds, linseeds and pumpkin seeds. He was also very proud that their breads didn’t include any preservatives so it looks like the Real Bread campaign has come to Mumbai already. 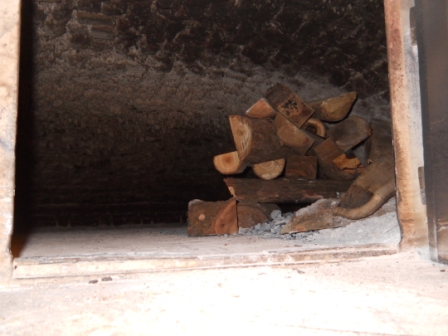 Apparently this bakery is part of a long tradition of Irani bakeries in Mumbai.  When the Iranian Parsees came here they took up trades, including baking, and learned many of their skills from the Portuguese who occupied the port at the time.  Bom Baie is Portugues for ‘Good Harbour’. The Portuguese went, the British came and went, but the Irani bakeries remained and several are still doing very good business. 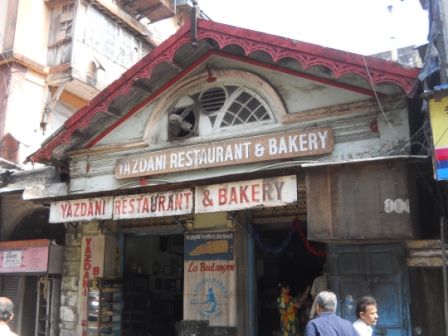 We’ve also explored Crawford market which was built by the British and still operates as one of the biggest vegetable and meat markets in the city …. but that’s another story.