We’ve now been in Kota  for four days and have been getting a fascinating insight into day-to-day life in Rajasthan.  Kota is an industrial centre, handy for links to Delhi and Mumbai but well off the tourist trail unless you are a bird watcher , a connoisseur of miniature paintings or a trader of fine cloth.

Vicky and Joy have lived here full time for 17 years, running the family farm and playing an active part in the local community.  As such we have been able to look behind the scenes at all manner of local industry and agriculture in a way which would have been impossible had we stuck to the main centres of tourism.

Yesterday we visited a local muslim village which specialises in weaving exceptionally fine cloth, mainly for saris, into which gold and silver thread are added.  One sari might take anything from one week to six weeks to complete with two weavers (almost always women) working 10 hours a day. They sell for anything from 3,000 rupees to 75, 000 rupees  (£30 to £750).  That’s the local cost so I dread to think what that might translate to by the time it reached a boutique in the west. 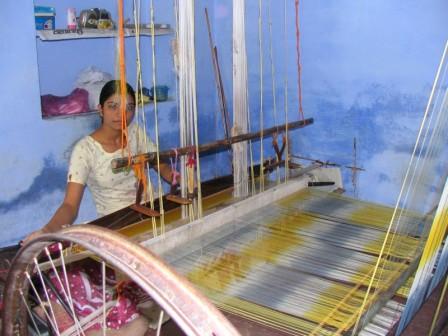 We were able to watch the saris being made and then visited the home of one of the main cloth traders.  We were welcomed profusely, sat down on rugs, given hot sweet chai and then shown cloth of every grade and colour. (Holly bought a stoll thnking the opportunities to wear a sari in Devon would be limited however fine it might be).

Next we stopped by the bangle makers. This seemed to be a mostly male occupation and we were once again invited in to see the action. Four men sat on the floor around a fire of charcoal embers, melting and mixing resins of different colours then beating them into shape, cutting, sealing, sizing and cooling them. We watched for 5 minutes or so by which time the fumes were threatening to overwhelm us. It’s not somewhere I’d like to work day after day.

As I mentioned this area is off the beaten track so the sight of three westerners wandering around the village aroused a good deal of curiosity. Being stared at by everyone, I mean absolutely everyone, is disconcerting even when they are being friendly. Children mostly giggle, possibly because we just trod in another goat poo. The good thing is you can actually look at goods for sale without any hassle and get to chat to people, albeit in 2 very different languages.

Outside of the village we dropped into an agricultural research centre to see the grain bank. Here they grow 20 or so different varieties of wheat, along with many other crops. The genetically pure seeds are sent to regions across India where they will be sown and turned into certified wheat seed for sale to farmers. The technologists were able to tell us which varieties suited different climates and which produced the best bread. 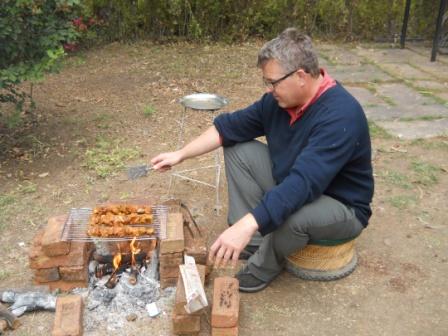 Sudna, the housekeeper, has watched in bemusement and laughed at our funny western ways. Everyone says you can do what you like with spices and recipes but if you do, they’re very quick to point out “Oh we never do it that way….”

We’ve been introduced to new fruits, like amla and chikku, and new ways of cooking; the baati, unleavened bread rolls, were cooked directly in the embers of a cattle dung patty fire and then brushed off before serving.  I can’t see that catching on at home or going down well as part of a class. 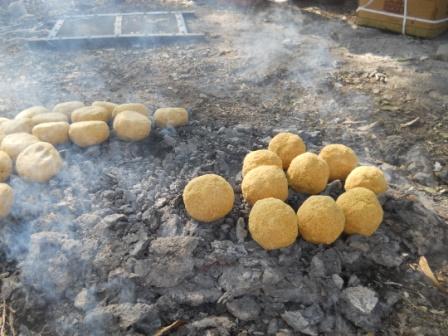 It’s been a great stay, very relaxing and very informative.  Tonight we will board the Radjhani Express and, all being well, will wake up shortly before arriving at 8:30 in Mumbai.  The contrast between rural Rajasthan and frenetic Mumbai will be stark and we’ve a busy few days ahead.  I wonder if we’ll see one of these in the big 21st Century city …. 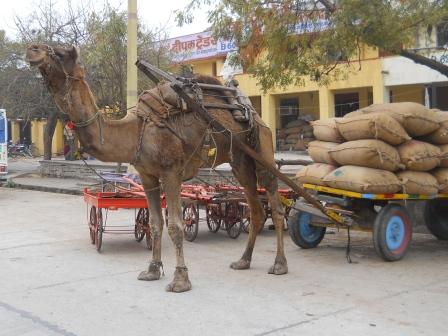 p.s. Just as I was writing this blog Joy saw a cobra near the house. A great ripple of excitement, gun called for.  I missed it and the gun arrived too late but I think I’ll stop walking around in flip flops.