We are now in Kota with Vicky and Joy after a short stop at Chittorgarh.  Travel and poor internet connection over the past couple of days mean we’ve missed posting blogs but we should be ok again now as we’re here until 3rd January.

We took to public transport again and first the local bus to Chittorgarh; everyone we mentioned this to went pale and asked us to reconsider for a car but really – how bad could it be? We left our hotel in Udaipur at 7am and by 8 were heading off on the bus having fortunately bumped into the Chittorgarh bus conductor whose deep bass voice could be heard all over the bus station. Admittedly there was a bit of bemusement that we would want to travel on a bus but at 60p each for 2 hours it seemed like a bargain and it was on time. By 10.30am we were in the hotel being welcomed like longlost friends.

Chittorgarh is a gorgeous spot – a 6km long, 600 year old fort on top of a hill in the middle of a plain. Lonely Planet advises a day visit as there is nowhere worth staying but since publication, the Padmini Haveli has opened. This is an old merchant’s house rebuilt by a local couple, Sudhir and Parvati, with the help of some Swiss friends; from the moment we walked in, we were greeted as old friends and made to feel completely at home – Holly was planning on staying there for good. It’s a fabulous retreat and the good thing about being in a village on top of a hill is the peace and quiet after the urban turmoil. 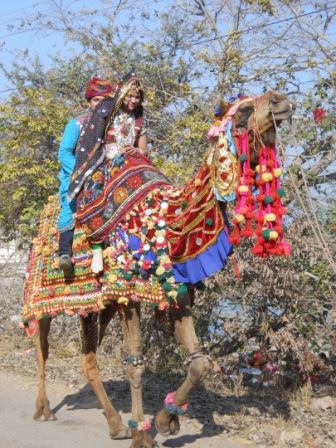 Afternoon out in Chittorgarh

However we have now moved on and are now in Kota. This time we took the train and mistakenly took the local stopping train so arrived 3 hours late for a 2 hour journey. 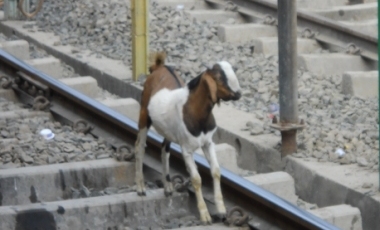 Goat on the line

Kota’s not a normal stop on the tourist trail as it’s a major industrial centre but we’re staying with friends on their farm and practising our new found cooking ideas. We had a morning shopping with Vicky and it cast some fascinating insights into day-to-day life in India as a westerner over the past 30 years as well as taking us to places we wouldn’t have visited – the inner workings of the city post office, the area where the dairy men hang out, and the local animal hospital where street dogs are castrated and injured cows end their days. 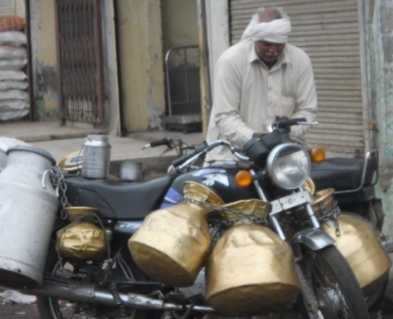 Milkman in Kota – the brass containers keep the milk better