In the Sardar Market earlier today we sat down to wait for our tuk-tuk.  It was a shady spot with a man in uniform sitting there looking official so it seemed like a place to avoid the touts who’d otherwise be trying to drag you into their shops. This is very common practice and we’ve got caught out once completely, once where we rushed off to a prior engagement and since then we’ve been better at saying we’re not interested.

Here’s the usual approach by the shopkeeper or their agent.  ‘Are you interested in this thing you are looking at?  Let me helpfully tell you something about it.  Where are you from?  Oh! England? Your time out magazine/financial times have written about my shop and Liz Hurley bought the material for her wedding dress there, or, Gordon Ramsey came to my shop and bought spices and said they were the best he’d ever tasted.  Now come and look at my shop.  I’ll take you there. It’s very close.  Just have a l0ok; no pressure’. Once in the shop you’ll be offered tea and given the spiel on spices or textiles and shown dozens of examples of rugs and told how they can be shipped anywhere in the world blah, blah, blah.  Then you have to extricate yourself  from the ‘no pressure’ salesman … no easy feat. 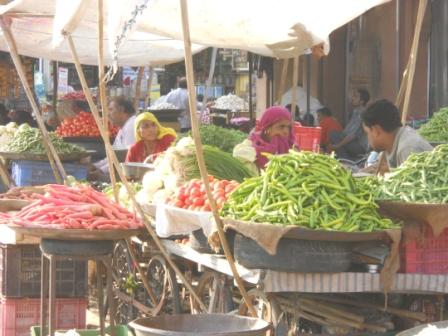 So that’s why a hassle free spot is worth seeking out and how I came to be sitting next to a Police Inspector from the Jodhpur force. He asked me to come and sit by him so he could practice his English and he asked about our impressions of the city. Now here’s the dilemma. Is he genuinely asking for feedback as an agent of law and order and should I therefore tell him the absolute truth. Or is he asking as a proud citzen of Jodhpur who’ll be offended if I describe it as anything other than an earthly paradise.

Here’s the true impression.  The city is horribly polluted both by exhaust fumes and noise. The norm is to throw refuse directly onto the street where it’s eaten by cows and feral dogs (both of which roam the streets in their hundreds). Chances are you’ll step in crap; if you’re lucky, it’ll only be cow crap. There is a near constant pong of human urine, often right next to a street food vendor. Holly’s developed her normal stop-work-get-cold thing so is happily oblivious to the smells. The roads are shocking, and it’s difficult to judge which is the most ubiquitous, touts or beggars. Homeless people live on almost every pavement and the whole place looks incredibly shabby. Achee! welcome to India. I wasn’t really expecting anything else. 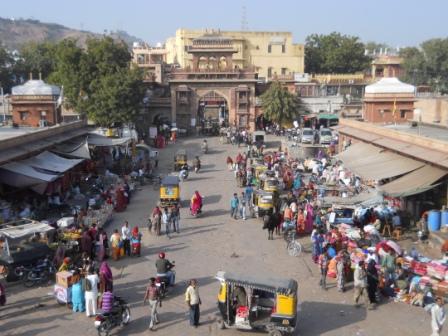 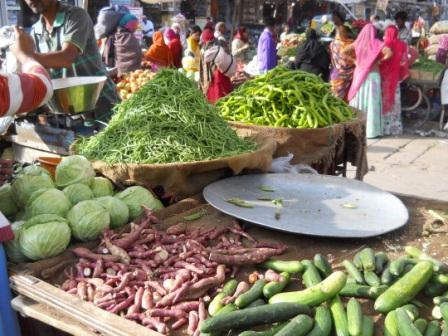 On the plus side this place is incredibly vibrant; the constant chatter, the general good humour, the colours, the friendly girl who tries to sell me necklaces everyday, street food vendors on every corner, market traders calling. Apart from the shop touts, tuk tuk drivers offering a ride and the occasional, passive beggar we drift about unmolested. People are friendly and the atmosphere is as relaxed as the street dogs or cows seem to be. 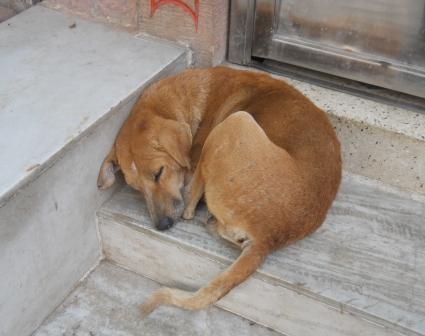 I start tentatively with the Inspector. ‘The fort is magnificent’, an easy truth, ‘and everyone has been very friendly’. ‘Yes of course’, he says, ‘but what about the infrastructure’.  ‘It’s easy to get around, so many tuk tuks, but very congested and the roads are terrible’.  ‘Yes’, he says, ‘we have many problems’.  Then he starts to reel off his list; rubbish in the streets, greedy shopkeepers,  beggars, traffic, dog s**t. Oh! it’s not just us being fussy westerners then.

We ask the inspector about crime in Jodhpur. He tells us it’s very low, just 247 crimes reported this year so far in his area. What about robberies from hotels or tourists being mugged.  He says it’s zero and there’s no organised crime or big stuff, just petty offenses and low level fights. Now I understand why he’s looking so relaxed and taking time to practice his English with us and why we feel so comfortable walking around.

Once our tuk tuk arrives I’m happy to leave the pleasures of the city centre behind, wash off the polution  with a swim (the staff here think I’m mad to swin in the depths of winter) and relax in the calm of our hotel before heading off to Udaipur tomorrow. 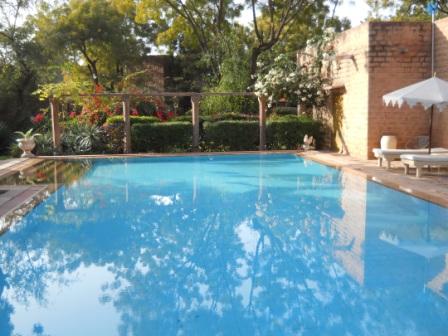 The Pool is actually Freezing.