Marmalade (It’s not just for Paddington)

At this time of year the shops are full of Seville oranges ready to be made into marmalade.  Not at all good for eating, their sour taste transforms with soaking, slow-cooking until tender and then adding sugar and boiling again to become the breakfast preserve of choice for our B&B guests who seem to get through a tonne of marmalade each year.

After several recent trips to Spain where the citrus trees are currently groaning under the weight of fruit and the Seville oranges are generally ignored or left for export to the UK, I thought it was time to make our own, to stock up the larder for the breakfast season ahead.

Now I’ve never had a lot of success with jams or marmalades – much happier with a pan of chutney boiling away (nothing much can go wrong with that). David’s mum and dad both made great fruit preserves and his brother Greg seems to have picked up that particular mantle, creating jams tasting of fruit and not, well, jammy.  My previous attempts at fruit preserves have been too solid or too dark and jammy from overboiling.

Most year’s are spent collecting and washing empty jam jars  and storing them in a cardboard box the hope that they may be put to good use.  Usually they just go dusty and then end up in the bottle bank, unused. This year, though, they been brought back to life – washed in hot soapy water,  rinsed and put in an oven at 100C to sterilise them for 10-15 minutes before adding the marmalade. One last attempt…. 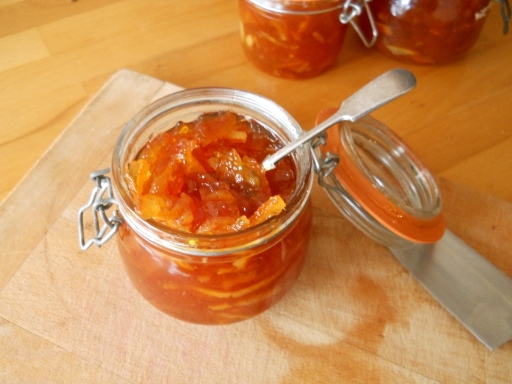 We’ve just had our kitchen decorated and, it being a cold , stone house, the whole place is prone to damp, especially with a pan of fruit, water and sugar bubbling away. I’m under strict instructions not to create too much steam so this time I took out the pressure cooker (something else that strikes the fear of God into me) and looked up some techniques for making marmalade in it.

Indian friends swear by this method of cooking as it maintains flavour and reduces cooking time and fuel so – as most recipes for marmalade say to boil the fruit peel for at least an hour and a half and the pressure cooked method was a mere 15 minutes, it had to be a winner.

And what a winner it was – I’m now on to my third batch of pressure-cooked marmalade, feeling pretty confident with the great hissing thing sitting on the hob which in 30 minutes creates marmalade worthy of my parents-in-law, tasting slightly sour, full of orangey fruit and not in the least bit jammy. Must start collecting those glass jars again – it will soon be jam season. 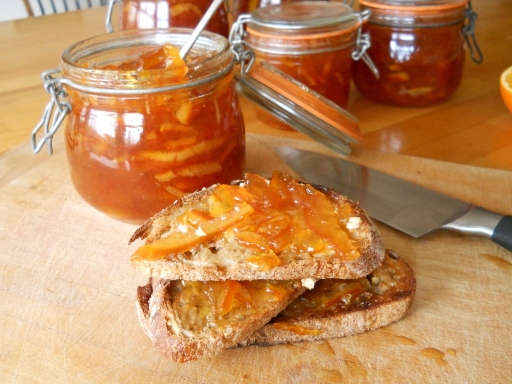 Here’s the recipe I used –