Portuguese Custard Tarts – one of our favourite tarts of all time!

Ever since we travelled to Porto for a mini break a few years ago we have been trying to reproduce the delicious Pasteis de Nata we tasted all over the city. A different thing entirely to traditional English custard tarts, the thin, light, crisp pastry surrounding a soft, sweet filling with a speckling of colour on the custard just this side of burnt, has eluded several attempts.

However, I think now we’ve finally cracked it. Whenever we serve these at the cooking school they get incredible feedback. So much so that we are now happy to go ahead and share the recipe we’ve settled on. 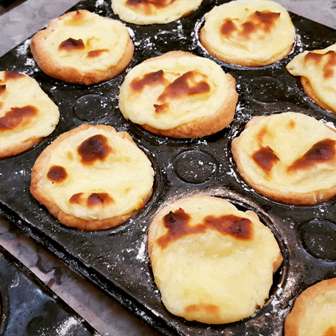 You’ll need 2 x 12 jam tart tins (or 1 and cook in 2 batches), well buttered to stop any sticking if not non-stick

You can obviously use shortcrust pastry and just cut out rounds but then you won’t get the lovely crispy layers from the puff pasty or the swirl of cinnamon in the base. We don’t recommend just using cut-outs of puff pastry as they will rise up as they are supposed to and push out your lovely custard. 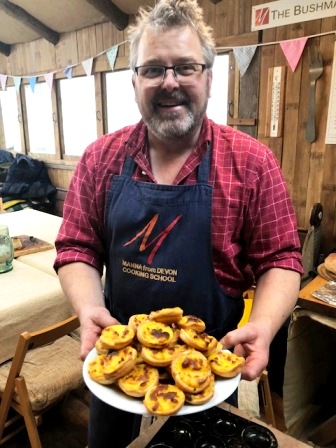 Fill and Bake the Tarts

They can be enjoyed warm or cold.  If you’ve made a batch but don’t want to eat them all they will freeze well. Just place a few in a tupperware box and freeze for up to 3 months. You probably won’t need to though as they will all disappear pretty sharpish!