This getting ready to go to India business is proving to be interesting.  Of course we’ve spoken to lots of people about it, in fact pretty much anyone standing still for thirty seconds in our vicinity has found themselves fully appraised of our intended route.  The first thing most people say, especially if they have traveled in India themselves is,’ wow, I’m so jealous,  you’re going to love it’.  This is followed with, ‘I was so sick though’, or ‘Don’t drink the water’, ‘Go vegetarian’, ‘clean your teeth in beer’, ‘Avoid the street food’, ‘Take Imodium’, ‘Dodge the salad’, ‘Leave the fruit’ or some other such food/health/diet/gastroenteritis related advice.  It really does seem to be the big issue for travelers to India.

So what’s a food loving, culinary adventurer to do?  I can’t not eat street food; that would be like going to Disney Land but avoiding the rides because they might be dangerous.  And I will not be turning my nose up at meat or fish either, because I want to experience all of India’s food, not just the vegetables.  Am I to ignore the usual good advice to eat raw fruit and vegetables regularly as part of a healthy diet?  For a month? That doesn’t sound like a healthy option.

The thing I haven’t been able to discover is why everyone seems to get sick. Is it because no one washes there hands after going to the bathroom?  Is it because the fresh water system is contaminated by the sewerage system.  Or is it really just the revenge of the Nawab of Pataudi as Peter Tinniswood would have us believe.  The internet is littered with tales of projectile vomiting and worse but few seem willing to address the root causes. I did find a couple of people claiming it was because westerners weren’t used to the spices in the food and it caused irritation of the stomach.  Given everyone else’s description of their ailments this sounds like a lot of rot about gut rot to me.  Given this lack of hard data it’s hard to know exactly where to focus one’s defence.

Another oft repeated complaint seems to go like this.  ‘I took every precaution possible.  I stayed in 5 star hotels, I cleaned everything with baby wipes before I touched it, I slathered myself head to toe in anti-bacterial sanitiser, I only drank gin for the whole time I was there and apart from that I only allowed dry cornflakes to cross my lips.  Despite that within 24 hours of landing in Delhi I was locked in the bathroom begging for a swift and merciful release’.

With all of that in mind I think I’ll just try to be careful but not obsess about it.  It seems like I could get ill even if I’m super careful which would be a shame; but the real shame for me would be to deny myself a whole array of possible experiences because of paranoia about a touch of Delhi belly. The first I’d regret, but probably only for a matter of hours or days (I know! some took weeks to recover).  The second, however, I’d be kicking myself about forever. 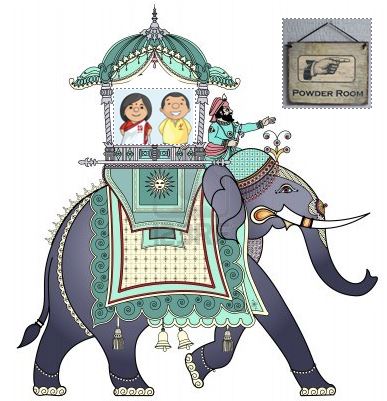