Building a Wood Fired Oven, Alpujarran Style – or How (not) to Build a Clay Oven

Those of you who have been with us on our Alpujarran retreats may well remember the wood fired oven we used in the garden in Jubar. You will certainly remember the location – a wide open space with fruit and olive trees, overlooking the sweeping expanses down towards the Mediterranean with, possibly, views of North Africa blurring into the distance. 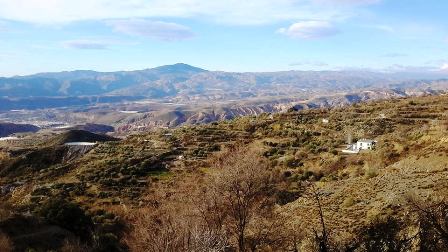 The views from Mairena

The oven itself is artisan in appearance with a hump reminiscent of a Space Hopper on its side; that’s probably to do with the fact that it was in fact an old Space Hopper used as the shaper for the oven, with the handles in the door so there was something to pull on when it came time to get the hopper out. 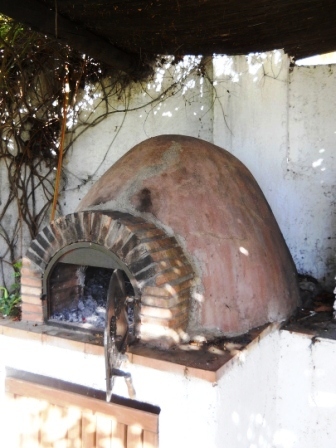 The beast with its obvious Space Hopper outline

The oven is a bit of a beast and takes some substantial heating with most of the cooking being done just in the doorway or very protected with lots of foil. Fortunately there’s no shortage of olive and almond logs to hand for fuelling – but it’s certainly the fieriest furnace of the ovens we have cooked on! 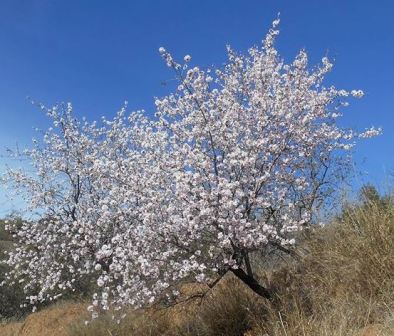 And we have cooked plenty of fabulous meals here – memorable long leisurely lunches for the groups after a walk up to the Chestnuts, contouring along the valley to the ancient trees before ambling back to the garden via the old village church on its promontory sticking out into the valley. If you’d like to experience some of what we do on our foodie trips, as we’re not going at the moment, do join one of the weeks run by the E5 Bakehouse – more details here. 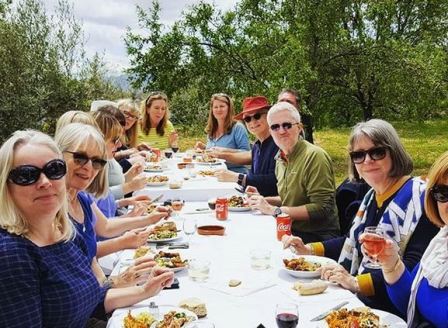 The oven was built by David and Emma of Las Chimeneas in Emma’s Dad’s garden and there is always a handy garden hose to hand in case of sparks flying out. The thought of setting fire to the arid Alpujarras is too much to bear and you can completely understand the blanket ban on fires in the summer once you’ve walked over the crispy dried grass and seen the hillsides of dried plants and herbs. Fortunately we’ve always been able to use the oven apart from one evening of a biblical rainstorm which took out the electrics and sent us into the restaurant to cook by gas, candlelight and headtorch! 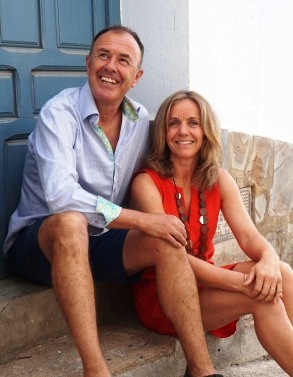 When we asked David about their experience of building their oven, here’s what he had to say –

“The old folk knew exactly what they were doing, back in the day, when they cooked just about everything  in the great, wood-fired ovens. That was my thought, anyway: just make a rough copy of the village oven, and all would be well…..

The hills behind us, you see,  are full of clay, but, mysteriously to this novice at least, this clay is of different grades, so we were told to take the advice of a neighbour, who knows about these things. The old man in question is a lovely, lovely chap, only about four foot tall, but he knows everything that there is to know about the stuff in life that matters, and I listen to him slavishly. He speaks in his own super-fast, super-thick Andalusian dialect, and employs a minimum of consonants, so, bending low to my guru, I have to struggle to understand. He clearly thinks that I’m an idiot. 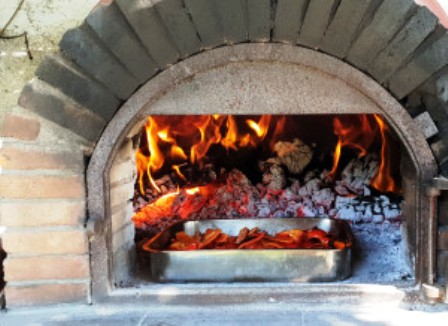 It’s too far to walk so we heave him into the 4×4. Eventually we reach the patch of diamond-hard ground where we are to begin. Doubtfully I lift my pick-axe and crash it into the earth. Nothing happens, so I spit in macho fashion on my palms and try again. This time the pick bites, but stays where it is, so I have to wriggle it free in less than macho fashion. I try once more, but a Tom-and-Jerry-like boing vibrates through me and I let go of the handle – and much of my self respect.  By now my English friend is laughing hard, and he takes over. Now, bear in mind that said friend is the kind of bloke who can out-dig a badger, and I’m expecting great things of him, that English pride and dignity can be restored. Dear reader, alas, I’m afraid to have to report that this was not in fact the case. Despite much enthusiasm, much pain, and yes, perhaps some rather distasteful language, our efforts were largely in vain. 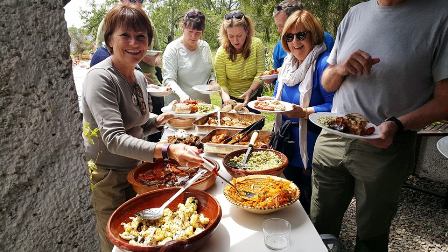 Lunch from the Wood Fired Oven

All the while my old neighbour, Pepe, for I shall call him this, is looking on in growing stupification. I watch as his wrinkled face changes from bafflement to unbridled contempt, through to downright rage; the kind of face he might make if I’d just pissed on his sleeping dog, say. Eventually he can stand the comedy no more, and takes charge. His skinny arms are a blur, and through the dust and the sparks a miraculous pile emerges, whilst we cower heroically behind, muttering that we must have weakened the ground for him.

“Now what?” I ask respectfully, holding out one of the tennis ball sized gobbets of earth to him.

“You beat it with your flail, claro”

There’s no derision in his voice, no mockery, just confusion.

“ Eh ? Just use your mate’s then, okay,” he says gently, feigning compassion in the way he might use to an axe-wielding maniac.

My friend slowly shakes his head. He doesn’t have one either. Claro.

Pepe whistles softly through his two remaining teeth, wondering just how he’d managed to find himself halfway up the mountain with this pair of mincing, foreign eunochs, whilst we stand side by side, heads bowed, humbled. Now, I’d like to be able to say that, from time to time,  it does a fellow good to be completely unmanned by an aged country midget. But it doesn’t. It feels rubbish, and the ride back down on the bumpy track was very quiet, with little Pepe bouncing around on the back seat of the jeep, the size of Action Man.

Spirits lifted as soon as we were back in the village. Pepe scuttled off, glad to have survived the pantomime, and we carried home our sacks in some triumph.

Now, we might not have had a flail, but we did have a cement mixer, and this, churning with a lump of iron inside (oh yes,  I always have a lump of iron around, claro) made short work of  it, and we soon had a decent pile of semi-powder to mix with water.

However,  to go with the absence of a flail, there was also the absence of a design. But I did have a 1970s  Space Hopper. At least the kids did, but they were at school, and to my mind it would make the perfect so-called “former” around which we could shape our project. And so the rest was easy: a solid square platform made of concrete,  some fire-proof earth tiles, a lovely cast-iron door from Granada, and a humiliation’s-worth of clay, spread a foot-thick over the whole caboodle. 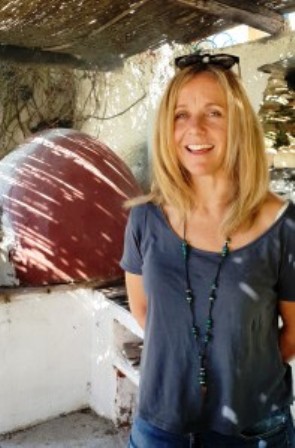 Emma with the Space Hopper shape in the background

It looked great. It actually looked exactly like the original, down to the colour, it had been infused by our own sweat and tears, and had cost next to nowt, almost. So far so good. The debut was to be made on Christmas Day. I confess that this maiden voyage was not the imagined perfect success: a combination of a long walk and rather too much cheap wine conspired to mess up our timings. To my consternation our 15 kilo turkey had down-sized to a 300 gram carbonated sparrow, but that wasn’t the point: the point was, it worked.

Kind of worked. The thing is, it took quite a long time to get hot. Six hours, in fact. Okay, seven. And a colossal amount of olive wood. Enough to build a decent-sized rowing boat. Not only did it look like the old village oven, it behaved like one as well; it’s just too darned big; if we were to keep it alight for months on end, and share its use with the rest of the community, then it would be grand – even though I say so myself – but it’s not exactly the kind of thing you’d want to spark up in a hurry to grill your breakfast bacon.

Months later, our friends at Manna From Devon,  who are experts in the subject,  explained to me gently, diplomatically, soothingly, that our construction is perhaps, ahem, a tad over-engineered. Pants, I think, was the adjective of choice, though I may mis-remember. Trouble is, they actually  know what they’re talking about, and a 1970s Space Hopper, apparently, has all the thermodynamic properties of well, a Space Hopper.

Bread from the wood fired oven

Not that it matters. We light it up every month or so and it’s always a joy. Just the fact of the sunshine, the flavour of the olive wood, the beguiling setting; it’s an event, a thing of beauty. We’ve cooked everything from fish to fruit, from sourdough to scallops, black pudding to rice pudding;  even, on one memorable Spring afternoon, Andrew’s eyebrows, for we do, occasionally, still make mistakes, though these days these are mercifully few and far between.

After listening to the experts we’re getting better. Our boys Danny and Tom are the best judges, and they tell us we range between  PLS (Pizza-like substance) to WBP (World’s Best Pizza) so we’re getting there.

You should come and  try it some time.