Woodfired cinnamon buns – just so soft and puffy that you want to rip into them as soon as they come out of the oven. The spicy aroma, the buttery dough and the sticky fingers – heaven on a plate!!

Here’s how we made ours –

Egg wash (1 egg beaten with a good pinch of salt)

Sugar nibs or granulated sugar to sprinkle over the top

Baking dish buttered and lined on the base with baking parchment 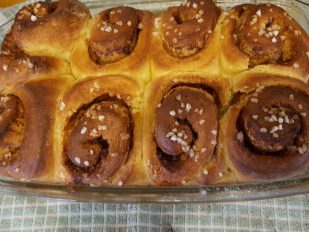 The finished buns straight from the oven!

Mix in some poppy seeds with the cinnamon butter

Finely grate the zest of a lemon into the dough at stage 2.