Today’s highlight should have been my arrival at the half way point in Porthallow.  Who, after all, would be thrilled at reaching the midway point of this marathon. However, that momentous moment was upstaged by a little upstart in the form of a chough.

Choughs are a crow, almost always found on cliffs and distinguishable by their red beaks, feet and legs.  They are wonderfully acrobatic and are a reasonably common sight in parts of Wales. Choughs disappeared from Cornwall in 1973 and then naturally reappeared on the Lizard in 2001. Since then a tiny population has remained and grown, carefully monitored by the RSPB. I had hoped to see choughs during the walk but the chances were slim and if I’d see them at all today would be the day.

As I walked, I watched the skies and cliffs; any bird I saw move was scrutinised in case it was a chough. None were. Then I walked around the corner and there, on the ground, was my elusive chough. At my untimely appearance it gave a cry and flew off. I would have liked to watch it for longer but it was gone. At least I’d had my first sighting of a Cornish Chough and that was definitely enough to make my day. 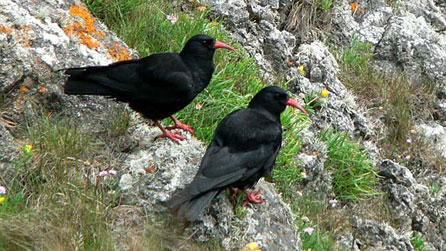 Not my picture of some Choughs.

For some reason the coat of arms of my home village of Kingswear includes three choughs.  If anyone knows why please let us know.

After that the arrival at the half way point was a bit of an anti-climax but still worth a photo.  The South West Coast Path Association have built a rather splendid monument to mark the spot. 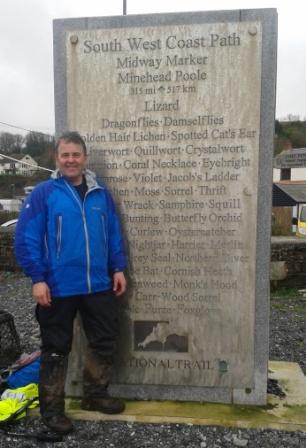 The Half Way Monument at Porthallow

I also loved this rather different approach to on street parking I spotted in Cadgewith. 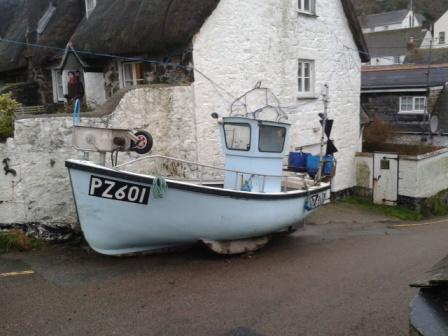 The day ended on the Helford River and will resume tomorrow miraculously on the other side.

State of Health …. feet still bad but better than yesterday.  Otherwise all good. New boots in action tomorrow – huge thanks to Richard at Outback Trading in Helston for all his boot knowledge.