‘What did the Moors ever do for us?’

The Alpujarran landscape is shaped by water, in its formation, in its vegetation, in the subsequent human re-engineering of the land for agriculture and in the way of life which still exists to some extent.  The influence of water touches almost every conversation here, whatever the subject being discussed.

During the ice ages Europe’s most southerly glaciers formed in the Sierra Nevada and as they made their way to the Mediterranean they scoured out the deep ravines which make up the Alpujarran valleys on the south side of the massif.  Ever since gravity dictates that any water coming either from underground aquifers or from plentiful snow melt must run down these deep valleys.  As you walk around a contour the difference in vegetation between the gulleys and the shoulders between them is very distinct and even in the driest periods water still runs in most valleys. 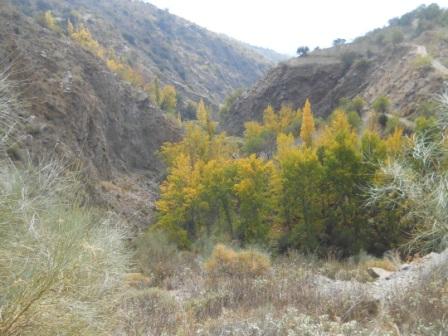 Poplars in Alpujarran river valley stand out against the surroundings.

As the ice moved south so did the vegetation which lived on its fringes.  When the ice receded the plants remained and adapted. Many plants found in the Alpujarras exist nowhere else on earth and remain as the successors of those ice age orphans.  They are the jetsam of a receding tide of frozen water.

For most of the year this is a dry region, rain when it comes tends to be short and heavy and it runs quickly off the steep slopes. Small reservoirs are everywhere to capture the rain and agricultural land is rutted to retain water. But retention of these short burst of rain is difficult so consistency of supply is the big challenge.

Enter the Moors (Muslims from the Middle East and North Africa) who from 711 until 1492 occupied this region and most of the rest of Iberia. They brought with them remarkable water management skills and they took on the challenge of irrigating the Alpujarras. The system they used sounds reasonably simple; dig a rill/channel/ditch to redirect water from a steep, wet valley along a contour, irrigating the land as the water flows. What is really impressive is that some of these acequia run for 10km or more, always at a very steady gradient, and then break into multitudinous smaller channels, all filling from the original natural stream. What is truly amazing is that many of these acequia remain in good working order in the 21st century, still doing the job they were designed for as much as 1000 years after they were built. 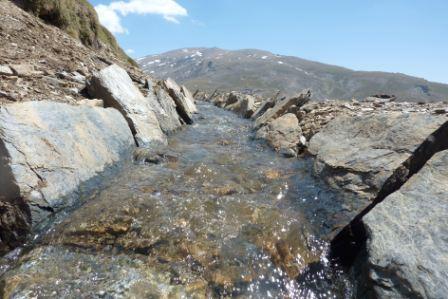 When the Catholics finally booted out the Moors in 1492 most were exiled from Spain (although by then they had no other homeland).  However, in deference to their expertise each village was allowed to keep one Moorish family to manage the existing water system and pass on their knowledge.

Nowadays this irrigation system is still used.  Sluices are opened and closed to feed water in different directions in accordance with a complex mathematical model first invented by the Moors to ensure everyone gets a fair share of the available water. The land alongside the acequia is populated with plants which would otherwise not exist here at all, like chestnut trees, whilst crops like olives, peppers, courgettes and tomatoes can all flourish on land where they wouldn’t stand a chance without irrigation. 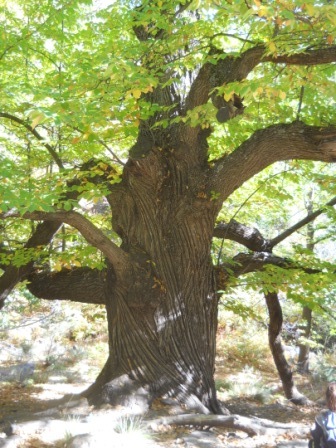 So the answer to the question, ‘What did the Moors ever do for us?, is simple. Without their expertise and brilliant engineering skills no one would have been able to survive in the high Alpujarras to ask the question.

P.S. As I write the forecast is for rain tomorrow and everyone here is talking about it and excited by it.  October’s rains were very low and the crops are beginning to suffer. The oranges, now starting to ripen, will be poor without water now and olives which will be ready to harvest soon, would benefit from a late dousing.  It’s difficult to begrudge this land its fair share so I hope the rain comes too, but please let it be one of the short sharp bursts the area is known for.